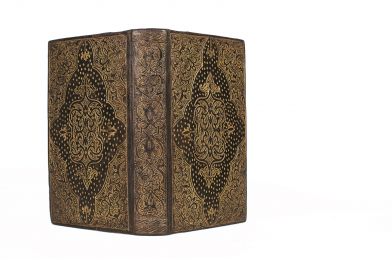 Guillaume Rouillé| Lyon 1551| small in-8 (10.5 x 17.5 cm)| 675 pp. (44 p.)| contemporary full calf
First edition of the French translation of Dialoghi d'amore by Denis Sauvage, Sieur du Parc. The title page is decorated with a very beautiful border engraved in wood based on a composition by Pierre Vase. A very beautiful Lyon print in italic characters, with ornamental initial letters and decorations. Copy entirely red ruled, 28 lines per page.
Contemporary binding from the city of Lyon, spine repaired richly decorated with arabesques and gilt stippling, the center of the boards decorated with a large typographic gilt motif against a background of gilt stippling, large arabesques and interlacings in the corner pieces, all edges gilt and gauffered with vegetal arabesques.
James Toovey's library ex-libris glued on the inside of the first board, that of Samuel Putnam Avery produced by the English painter and engraver Charles William Sherborn glued on the first endpaper, Gianni de Marco library's dry stamp on the following endpaper. Two old, handwritten ex-libris on the title page.
Librarian and publisher, James Toovey (1813-1893) was also an influential bibliophile. He acquired the Gosford Castle library in Northern Ireland in 1878. After his death, his books were sold in part at auction in 1894, while his son kept the other part which was then sold in 1899 to Mr J. Pierpont Morgan, founder of the Morgan Library in New York. Samuel Putnam Avery (1822-1904), art dealer and expert, was named commissioner in charge of the American art department at the Exposition Universelle in Paris. Founder and longstanding director of the Metropolitan Museum of Art in New York, he was also a great collector of prints and rare books with superb bindings.
This high quality work, one of the most beautiful productions from the Lyon printing works, then at its peak, is emblematic of a transitional period in the history of the re-emerging French language, two years after the publication of the Défense et illustration de la langue française by Joachim du Bellay.
Denis Sauvage's translation, dedicated to Catherine de' Medici, is an historical milestone in the history of the French language. Sauvage, for a time proof-reader for the publisher Guillaume Rouille, converted to La Réforme and was - like Froissart and Commines - historiographer to King Henry II. Particularly sensitive to the reform of the French language, he did not hesitate in this work to invent numerous neologisms. In total there are more than one hundred words that are indexed in the glossary, which he writes for the attention of the reader at the end of the volume. Many of these terms have today been adopted through use: astuce, bénévole, dimension, immédiatement (contrary to médiatement), moteur, etc. The publisher Guillaume Rouillé, trained at the Venice printworks, was one of the first in France to conform to the modernised spelling rules that Ronsard had just advised some months earlier.
Judah Abravanel (or Leo the Hebrew, 1460-1521), a Cabalist Jew refusing to convert to Christianity, was forced in 1492 to leave Castille for Genoa where he practised medicine. His dialogues contributed, along with those of Marsilio Ficino, to the diffusion of a Neoplatonism closely linked to the humanist movement in France. The poets in the Lyon art circle, then those from La Pléiade, welcomed the Philosophie d'amour with enthousiasm. Furthermore, we find a copy amongst the 105 volumes listed in Montaignes library that will be amused by the text's great success: "My valet made love, read Leo the Hebrew and Ficino." His influence will, however, carry through time, a century later Spinoza will borrow his concept of God's intellectual love.
Beautiful and rare copy, in a luxurious Lyon Renaissance binding and, notably, having belonged to Samuel Putnam Avery, founder of the Metropolitan Museum of Art in New York.