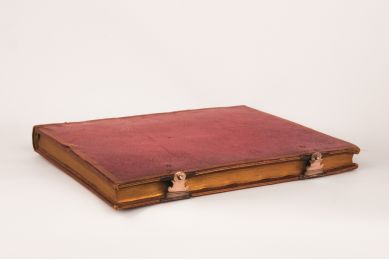 [AMERICA] PRICE Richard
Observations sur la nature de la liberté civile, les principes du gouvernement, la justice, et la politique de la guerre avec l'Amérique [Observations on the Nature of Civil Liberty, the Principles of Government, and the Justice and Policy of the War with America]
N. d. (circa 1776), in-4: 190 x 235 mm (7 1/2 x 9 1/4 "), 167pp (20), 18th-century full morocco
Original manuscript of an anonymous French translation that has remained unpublished of Price's fundamental and key work arguing for the independence of the United States of America. The first edition in English is from 1776, and was re-printed several times in that year. The first edition in French appeared in Amsterdam in 1776 and made mention of the preface for the fifth edition. This manuscript is a very different translation to that of the Amsterdam edition of 1776 and only contains the preface of the first edition. It was therefore prepared from the very first editions and predates the Amsterdam version, as well as remaining entirely unpublished.
The binding in which it has been preserved testifies to its importance, even if this translation was perhaps made only to circulate in manuscript form, like many other texts in the 18th century.
The translation of Price's work is followed by the translation of two dreams of Addisson's serving to illustrate Price's thinking in an allegorical way. The first is Songe d'Addisson qui peint l'image de la liberté [Addisson's dream which paints the image of freedom]; and the second is Songe d'Addisson sur la renommée [Addisson's dream on fame]. These two texts are by a Brit, and confer a British legitimacy to Richard Price's ideas on liberty and British renown. Joseph Addisson is the well-known journalist who established one of the most famous magazines, The Spectator, permanently satirizing contemporary British society and news.
Contemporary red morocco. Richly gilt spine, no title. Triple fillet frame to covers. Frieze inside covers. Brass clasps perfectly preserved. Gilt edges. A small tear to upper cover. Scratch to lower cover. Two corners rubbed.
A fine copy in contemporary morocco with clasps. In a fine and very regular hand, attractive layout. Ruled.
A close friend of Benjamin Franklin and John Adams, Richard Price was the most influential lawyer arguing for American independence. In this work, Price intended to show that Britain's attitude towards the American Colonies ran contrary to the principles of liberty. After defining the various types of liberty, Price asserts that civil liberty is "the power that a civil society or a state has to govern itself at its own discretion or by laws of its creation without being subjected to the will of another power that the popular community hasn't chosen, does not direct and does not control." The work enjoyed immediate success in the contemporary climate, raising questions about the state of democracy in Britain. Price rejected, moreover, not only the duties of war but also the institution of slavery under Great Britain. Church wrote that "[t]he encouragement derived from this book had no inconsiderable share in determining the American colonists to declare their independence." Decker: "It is said to have had considerable influence on the drafting of the Declaration of Independence".