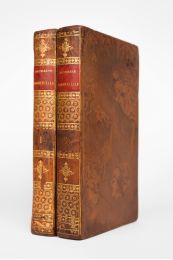 SIMONDE DE SISMONDI Jean Charles Léonard
De la richesse commerciale, ou principes d'économie politique, appliqués à la législation du commerce
Chez J. J. Paschoud., Geneva 1803 (An XI), in-8 (12 x 20 cm), (4) LXXXV (1bc.) 348 pp & (4) 448 pp., 2 volumes, contemporary sheep
Rare first edition.
Contemporary marbled light brown sheep. Spines with two blindtools and two compartments with grotesques. Red morocco title pieces. Volume labels in black wax, very rubbed and discolored. Head- and tail-pieces very delicately repaired as well as head and foot of joints and corners. Slit to one cover. A very good and fresh copy.
A work of political economy, the discipline the author considers the highest of all the sciences, since it is - according to him - dedicated to the happiness of the individual. Starting out as a systematic commentary on the work of Adam Smith to help his principles and axioms be applied in France, the work moves beyond its original scope in beginning to look for the general rules that govern both commerce and capital. Mark Blaug (1927-2011), a British economist, considers Sismodni the first critic of industrialized capitalism in his Economic Thought. The latter came up with a new way of regulating charges, using mathematic models to explain economic phenomena. His vision of the balance of trade is also innovative, with the author explaining the impact of excessive imports and exports. He also shows the extent to which a closed economy differs from a liberal economy based on international exchange. The work is fundamentally based on the thinking of Adam Smith, which regards work as the force driving production, and the role of government as freeing up this work in order to allow the accumulation of wealth.
Blue stamp to foot of title: Carles A. S. Alfonso. Black stamp on first leaf of preface: Ex-libris Vieira Pinto.
A rare copy of this key work of the history of economic thought.