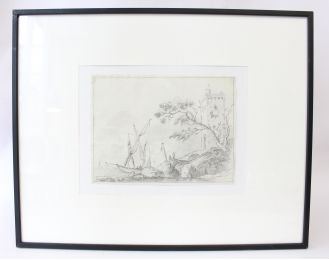 A drawing done during the journey the artist undertook with Sade in 1776.

Jean-Baptiste Tierce (1737-1794), who studied at the School of Fine Arts in Rouen and subsequently at the Academy of Painting and Sculpture in Paris, quickly built a reputation as a landscapist for his views of the South of France and Italy. His paintings are in the Uffizi in Florence and several French museums. When, in December 1775, Sade left Rome for Naples, he was welcomed by the son-in-law of his friend Dr. Mesny, Jean-Baptiste Tierce, who at the time was working on commissions for Cardinal de Bernis. He found lodgings for the Marquis who "intends to see everything [of the region], learn everything, judge, admire, critique, love, hate, in short give himself over to the insatiable and passionate curiosity that takes him to museums, galleries, churches, palaces and libraries as well as grottoes, caves, catacombs, and right down to the very innards of volcanoes. He was not content merely to look at the various works of art and ancient and modern monuments; he also set out to observe the local mores, politics, religion, administration, and social life. The beauty of the women, the local traditions, the quality of plays, table manners, and the way people drank, dressed, prayed, and made their way in the world all interested him. He wanted to take in both the present and the past of this culture, to encompass it all in a unique and universal vision. A massive undertaking to match his extraordinary imagination which he was, however, unable to fulfil, it being impossible for him to do so.
This was, however, the nature of his central ambition as a writer: grandiose and outsized. With a view to this "great work", Sade took hurried notes, at the side of the road or in hostelries, which he then complemented with notes from his correspondents Mesny and Iberti. Thus, he built up the monument he intended to put before the public, but which did not end up seeing the light of day until the 20th century.

Jean-Baptiste Tierce was a close collaborator: he re-read Sade's notes and gave his observations on the little notebooks, with numbers referring to the works mentioned. Sade took the greatest notice of his views. Often, the painter accompanied him on his rambles, sketchbook in hand, drawing the buildings and landscapes before them. A hundred or so of these drawings and watercolors were recently found in the Sade family archives. They give the Voyage en Italie the charm of a real travel diary." (Maurice Levert, Sade, pp. 283-284).