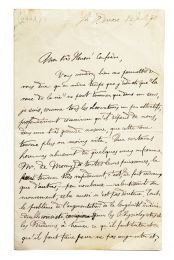 
Signed autograph letter about human aging
12 July 1890 | 11.2 x 17.9 cm | one leaf
Autograph letter signed by the physiologist and neurologist Charles Edouard Brown-Séquard, dated 12 July 1890, one folded sheet. He outlines a scientific method of prolonging human life, while at the same time developing a series of philosophical and epistemological reflections on mortality.

Successor to Claude Bernard in the Collège de France, Brown-Séquard here tries to push back the limits of ageing and prolong the nervous responses of the brain: "Not to grow old before time and to grow old as late as possible, that...is what should preoccupy those who love life or those who, without loving it, need to ensure it lasts."
Brown-Séquard had just published a study on this subject and had succeeded in administering a harmless nervous stimulation with an injection of liquids extracted from animal testicles.

Giving the example of the flamboyant Duc de Morny, son of Hortense de Beauharnais, who died at the age of 53, the professor lays out a theory that is broader than the simple neurological remedy: "It depends on the person whether the 'wheel of life' spins more or less quickly. That certain men (like M. de Morny) abuse all their faculties and make the wheel turn very quickly, is indubitable...The problem in increasing the lifespan of the individual lies, therefore, for physiologists and doctors, in finding what should be avoided and what should be done in order not to increase, and indeed to decrease the progress towards natural death. Insisting on the beneficial effects of animal testicle extracts, Brown-Séquard compares them with a more nefarious stimulant, strychnine, discovered a few decades before:
"I believe I have succeeded in increasing the various force of action of the nerve centers without stimulating, exciting, or putting them in play, which is to say diminishing them by making them expend themselves in action. Testicular liquid acts like strychnine, which does not determine the action but which only increases the strength of the reflex in the spinal chord. But the difference is that strychnine leads to a morbidly exaggerated excitability, so that the slightest excitement leads to discharges of nervous force."