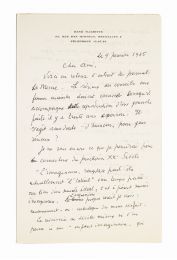 
Handwritten letter, signed with his initials

Significant letter written by René Magritte to André Bosmans, dated 9 January 1965 and signed with his initials. 35 lines in black ink on one leaf with the heading "René Magritte 97, rue des Mimosas, Bruxelles 3 Téléphone 15.07.30". Several words crossed out and passages underlined.

Published in the Lettres à André Bosmans 1958-1967, Seghers I. Brachot, 1990, pp. 407-408
A letter that is both comical and of great philosophical depth, in which the Surrealist painter René Magritte tackles the question of the imagination and inspiration. In it there is a very pertinent analysis of the issues of aesthetics and of modern thinking, while the painter is seeking inspiration to produce the cover of the next XXe siècle, an avant-garde artistic and literary journal (issue XXV, June 1965).
Magritte addresses this letter to his great friend André Bosmans, a school teacher, poet and editor-in-chief of Rhétorique, a literary journal to which Magritte actively contributed. The painter, then in full mastery of his art, enjoyed international recognition since the beginning of the 1960s. His work has already been the object of numerous retrospectives in France and in Belgium, and will be celebrated on the other side of the Atlantic several months later at the Museum of Modern Art in New York.
His letter is divided between humour and psychological reflection. Magritte's usual taste for irony is present: "Here is the extract from the newspaper La Meuse. The serious advice to pregnant women becomes comical when it accompanies this reproduction of a gouache made about thirty years ago. This is probably 'humour' for serious people?" A daily paper in Liège had indeed taken a Surrealist gouache painting by Magritte, entitled Maternité, where the mother was represented with a baby's face and the baby with the face of a woman, for one of its articles.
After this aside, Magritte provides Bosmans with a draft painting earmarked for a journal (reproduced below): "I don't know yet what I will paint for the cover of the next XXe siècle". The art journal Le XXe siècle was founded in 1938 by an Italian journalist reporting in Paris, Gualtieri di San Lazzaro, and appeared in the form of an annual notebook on modern art trends, embellished with lithographs and original works. Magritte featured alongside Giorgio de Chirico, his idol, and also Kandinsky, Jean Arp and Joan Miro, as well as numerous other pioneering artists or heirs to Surrealism. Each issue was dedicated to a different current subject, with contributions from critics, artists and writers.
Magritte dissects the title of the next issue for Bosmans ("Aux sources de l'imaginaire" "To the sources of the imaginary"), which according to him, symbolises an entire era that has become the subconscious slave since the Surrealist revolution:"'The imaginary' perhaps now replaces 'the ideal' of a previous era. Instead of an ideal museum, it is now an imaginary museum. I believe the proper expression would be: inventory or catalogue of the perfect museum." Taking André Malraux's well-known paradigm, the "musée imaginaire" "imaginary museum," Magritte emphases the transition from romanticism to Surrealism: this replacement of the pursuit of an ideal through the opening up on to dreams and the accidental. He also criticizes the XXe siècle's pompous expression: "It is the mediocre imaginary that is responsible (the source, speaking figuratively like the XXe siècle) for that which only has an imaginary value."
Because for Magritte, there is a fundamental distinction between the imaginary and imagination, between dreams and creation. For this artist, who is profoundly sensitive to the paradoxes of reality and the role of mystery in life and in art, the imagination is nothing without being creative. His paintings based on "hallucinated realism" demonstrate this belief, such as the famous Homme au chapeau melon (private collection, 1964), and even his Empire des lumières series (Solomon R. Guggenheim Museum and the New York MoMA, Peggy Guggenheim Collection in Venise, Musées royaux des Beaux-Arts in Belgium, 1953-1954).
The painter offers us his own cryptic and fascinating definition of the imaginary:  "Imagination that has power, so as not to confuse it with sterile imagination, should be called: inspiration, when poetry is in question. It does not have to be great or extraordinary. Imagination that is limited to the invention of a machine, or to the solving of a problem (Eureka) is great." In this passage, it is noteworthy that poetry occupies the top position in the hierarchy of genres, according to Magritte, who throughout his life sought to bring about a "poetic state" in spectators, and even put language in his compositions (L'Apparition, 1928, Staatsgalerie in Stuttgart, La Trahison des images, 1929, Museum of Modern Art in Bruxelles).
He finishes his letter with a most strange conclusion - his own glossary of fantasies:
"I therefore distinguish:  Great imagination/ Mediocre imagination/ And inspiration".
A fascinating letter by Magritte that mixes irony and belief, philosophy and fantasy, at the dawn of the creation of a new work.