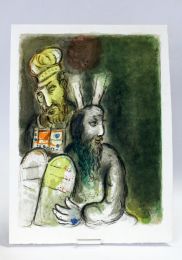 CHAGALL Marc. Moreover they made garments of ministration to minister in the Sanctuarie; they made also the holy garments for Aaron, as the Lorde had commanded Moses - The Story of Exodus
Amiel Léon, Paris, New-York 1966, 36 x 49.5 cm, one single leaf
Original color lithograph, one of 15 proofs on Japon impérial paper reserved for the artist and his collaborators, the only printing with 20 more on Japon and 250 on Arches paper. Unsigned proof, as all proofs in this series, other than the frontispiece.
A superb proof on Japon paper specially made for The Story of Exodus, published in 1966, for which Chagall made 24 hors-text lithographs printed by Mourlot.
An exceedingly rare original proof on Japon paper, the most attractive and best for color lithographs.