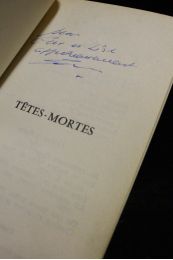 
First edition of which there were no large paper copies.
Precious copy inscribed by Beckett to his friend the painter Geer (Van Velde) and his wife Lise.
Spine very slightly sunned, not serious.

Beckett's growing affinity for Bram Van Velde's work and the energy he put into promoting his work, especially to the galerie Maeght or his friend the art historian Georges Duthuit, was no doubt to the detriment of his relationship with Geer. Nonetheless, despite some misunderstandings, their friendship remained unbroken; as did the silent but anxious dialogue that the writer maintained with the art of the younger Van Velde brother, two of whose large canvases he owned. "The big painting by Geer finally gave me a sign. Shame that it should have turned out so badly. But perhaps that's not true after all" (letter to Georges Duthuit, March 1950). "Geer shows great courage. Ideas that are a little cutting, but maybe only in appearance. I have always had a great respect for them. But not enough, I think" (letter to Mania Péron, August 1951)
The death of Geer Van Velde in 1977 affected Beckett deeply and coincided with a period of intense nostalgia during which the writer decided to give himself over to "a great clear-out" of his house so as to live between "walls as grey as their owner." Confiding his state of mind to his friend, the stage designer Jocelyn Herbert, Beckett bore witness to the indefatigable affection he had nurtured for the painter over forty years: "more canvases on display, including the big Geer Van Velde behind the piano."
A precious witness to the friendship of these fellow travelers who had, ever since checking the veracity of the game of chess played by Murphy and Mr. Endon for Beckett's first novel, tackled together the great challenges of modernity: "It's that, deep down, they don't care about painting. What they're interested in is the human condition. We'll come back to that" (Beckett on the Van Velder brothers in The World and the Trousers).