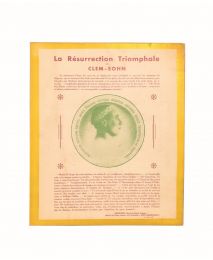 
(CLEM SOHN) Auguste BONCORS
Requiem de Clem-Sohn. - La Résurrection triomphale de Clem-Sohn
1937 | 24.2 x 27.6 cm | one two-sided plate
First edition of this double-sided board sign designed "for the glory of the American immortal Hero, as for the immense glory of the Air Force of all Nations."
Portrait of the poet Auguste Boncors, in profile with an emperor's crown and text entitled La Résurrection triomphale de Clem-Sohn, "The triumphal resurrection of Clem-Sohn." On the reverse, a poem Requiem de Clem-Sohn, printed in red and gold, and dedicated to Franklin Roosevelt.
Originating from Michigan, Clem Sohn made his very first parachute jump at the age of 18. Some years later, he made his first set of wings on his mother's sewing machine and completed his first jump in the wings in March 1935 on Daytona Beach in front of 100,000 people. From then on enjoying immense popularity, he performed at numerous events, including those in Europe. It was during the Vincennes Air Festival that he died on 25 April 1937; before take-off, he told a journalist: "I feel as safe as I would in your grandmother's kitchen."