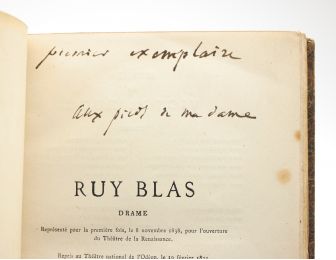 
Later edition, but partly first thanks to presence of the preface "à la France de 1872 [To the France of 1872]" published on the occasion of the revival of the piece at the Odeon on the 19th February 1872.
Half brown shagreen, spine in six compartments, covers preserved.
An exceptional autograph inscription from Victor Hugo to his mistress, Juliette Drouet: "Premier exemplaire aux pieds de ma dame [The first copy, laid at the feet of my lady]".
From its very creation until its overdue consecration, the story of Ruy Blas was intimately tied to that of Juliette Drouet.
Shut up at home all the while the piece was being written, Juliette was to be its first reader on the 12 August 1838 (Hugo finished writing it on the 11th). She fell in love at once with this romantic drama in which Hugo promised her the title role alongside Frédérick Lemaître :

"What a miracle your piece is, my poor beloved, and so good of you to have let me admire it first. Never have I seen anything so wonderful; including even your other masterpieces. It has a richness, a magnificence, a wonder...Oh my darling sun, you have blinded me for so long to come."

Juliette quickly came to know the piece by heart, certain verses strongly evoking the relationship between the author and the actress:

"Madam at your feet, in the shadows, there is a man
Who loves you, lost in the enveloping night;
Who suffers as an earthworm enamored of a star;
Who would give his soul for you, if he might;
And who lowly dies while on high you shine" (Act II, scene 2).

On the 15th August, Hugo confirmed her casting in the role of Doña Maria de Neubourg. Juliette could hope for no finer proof of his love: "I see glory, happiness, love and adoration, all this in huge and impossible measure..."
Unfortunately, far from presaging the hoped-for glory, this news marked the start of open hostilities from Adèle, who until this point had stayed out of her husband's adulterous relationship. At the end of the summer, Adèle wrote to the director of the theatre:
"I foresee the success of the piece being compromised...because the role of the Queen was given to someone who was involved in the scandal over Mary Tudor...Opinion...is against...the talents of Mlle Juliette...This lady is said to be having an affair with my husband. While I am personally convinced that these rumors have no basis whatsoever in fact...the end result is the same...I have some hope that you...will give the role to someone else." It was, in fact, Frédérick Lemaître's lover who got it in the end.

Juliette did not hide her helplessness: "I carry in me my mourning for a fine and admirable role which is dead to me for ever...I am more upset than you can possibly imagine." And, even if Ruy Blas was not the success they'd hoped for, her passion for the piece remained: "I spilled all my blood for you, for your piece."
On the 5th December 1867, when the Odeon mooted a revival of the piece, Napoleon III had it banned because "we don't want the scandal over Hernani breaking out again." Juliette was more upset by this injustice than Hugo himself, as her voluminous correspondence attests. Her letters on this subject are collected in Paul Souchon's work (Autour de Ruy Blas. Lettres inédites de Juliette Drouet à Victor Hugo, Albin Michel, 1939).

She fought for her reinstatement for years and, when Ruy Blas was finally revived at the Odeon in 1872, she took part in and commented on every step of the process.

Thus, coming out of the first reading by Hugo to the actors on the 2nd January 1872, she wrote:
"Victory, my great beloved! Your entire audience left with profound and enthusiastic feelings...Ruy Blas from the first word to the last is the masterpiece of masterpieces. I came out transported, ecstatic, full of the same love and admiration and adoration for you as the first time I heard you. All that was with me just now at yours when I was the most transported and the most moved, more so than the author of the piece. I am ashamed to express this to you so poorly, but I had to give in to the needs of my heart, which is bursting with your genius and my love. There it is, my love, and I rush to kiss your wings and your feet."

With Sarah Bernhardt in the role of the Queen, the piece was a triumph which grew and grew with each performance.

The day after the premiere, Juliette commented on this consecration, for which she had been waiting for more than thirty years: "You see, my love, that I was telling the truth about the prodigious and formidable enthusiasm of the entire audience yesterday. Never have you had, never could you have, a better reception. It was total delirium, growing with each verse. Your sublime poetry conquered every soul and one could feel the rivers of adoration flowing from all their hearts. The thunderous applause was so strong and so sustained that every hand sparked with electricity...And as for you, I feel that in this blessed month there is renewed love for you and it seems that all my fine memories are blooming once more and perfuming my soul with happiness. And I wanted to lay at your feet a divine bouquet".

It was Victor Hugo who in the end laid "at the feet of [his] lady" this masterpiece of Romanticism and testimony to their legendary love.