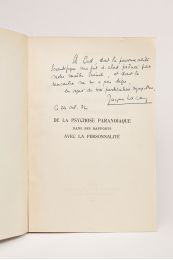 
True first edition of Jacques Lacan's thesis from which he did not draw great papers. Copy of the first issue, without the subtitle: " Head of Clinic at the Faculty of Medicine of Paris " which was added for the second draw.
Very rare and beautiful autograph dated October 24, 1932 and signed by Jacques Lacan: "to Cuel, whose scientific personality was first advocated by our master Trenel, and whose meeting did not disappoint me, as a sign of very special sympathy. "
Back very slightly insolated without gravity.
Our copy is presented under a black half morocco shirt, paper plates decorated with abstract patterns, case lined, together made by Goy & Vilaine.

JR Cuel, a young psychiatrist, was like Lacan, the friend and pupil of Marc Trénel, head of the White House asylum service where Jacques Lacan learned about language disorders. We did not find much information about this friend whom Lacan calls by his surname without mentioning his first name if not an intervention he will make in 1948 about the presentation of JR Cuel, then Member of the "Group of the Psychiatric evolution ", on the" nosographic place of certain presenile dementia ". On this occasion, it is again by this familiar denomination that the famous psychoanalyst will begin his appreciation of the work of his colleague: "I join the compliments made to Cuel ..."

The bookseller Hervé Valentin previously referenced the known copies of this thesis printed in very small numbers and that Lacan no doubt removed from the sale after discovering that one of his patients was the son of "Aimee" whose case is exposed at length right here. Among the 27 copies listed, only 9 are the First printing called "without subtitles" and intended to be offered to his close friends and colleagues: 2 copies without mailings and 9 copies with an autograph dedication conducted between October 1932 and July 1933. Let us add today this copy which turns out to be one of the first three copies signed by Lacan, just after that of his parents.

Exceptional copy of Jacques Lacan's famous thesis enriched with one of the very early autograph dedication signed by his colleague.