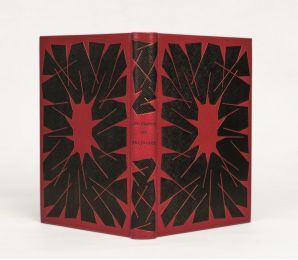 Rare first edition, second issue with the 1874 cover and title page.
Binding in full red morocco, inlaid boards with a significant gauffered black Box decoration, double red morocco paste downs, double red baize endpapers, preserved wrappers with a tiny snag at the head of the first board, all edges gilt, dust jacket with flaps in a band of half red morocco, red morocco and black cloth slipcase, superb binding signed by Georges Leroux.
Stamped ex-libris from Ch. Delgouffre on the half title page.
Printed in 1869 by Lacroix, this edition was not sold for fear of censorship. Only around ten copies were paper bound and given to the author (five have been identified to date). In 1874, Jean-Baptiste Rozez, another Belgian bookseller-publisher, recovers the stock and publishes the work with cover and a title page with the date 1874, and no mention of the publisher.
Dizzying literature at the limit of the sustainable, literature of adolescent excess, of total darkness, Les Chants de Maldoror, or the epic of a wandering evil figure in the world, became famous thanks to the surrealists who made it a true aesthetic manifesto.
Magnificent copy perfectly set in full inlaid morocco signed by Georges Leroux, one of the greatest binders of the second part of the twentieth century.