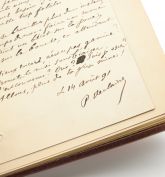 James MORIER The adventures of Hajji Baba of Ispahan 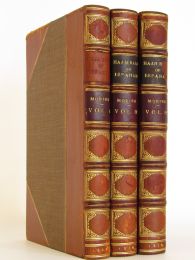 The adventures of Hajji Baba of Ispahan

Bound in half blond calf with slightly posterior corners signed Hatchards (Picadilly). Spine in compartments with decorated panels. Brown shagreen title labels and volume labels. Top edges gilt. Piece missing from the title label of volume I, with the blindtooled title present. Piece missing from the title label of volume II. 5 flattened corners. Rubbing.
The most famous English Orientalist novel. This picaresque work, in which one follows the tribulations of a young Persian in his conquest of fortune, has its roots in Lesage's Gil Blas. The work is accompanied in its satire by a severe critique of the institutions and power in Iran at the time. More broadly, the book provides very accurate information on life in Iran at the time. The book was later translated into Persian in Constantinople and the translator was mistaken for the author because the painting of Iran was so accurate. In his epistle, the author recounts having met Hajji Baba who would have given him the manuscript of his biography. It is possible that James Morier was inspired by a Persian work. Gobineau, a connoisseur of Asia and unconditional admirer of this picaresque classic, did not hesitate to declare: "L'Orient nous a apporté deux chefs-d'oeuvre, les Mille et Une Nuits, et Hadji Baba." "The Orient has brought us two masterpieces, The Thousand and One Nights, and Hadji Baba."

James Morier was secretary of the embassy and spent eight years in Iran.