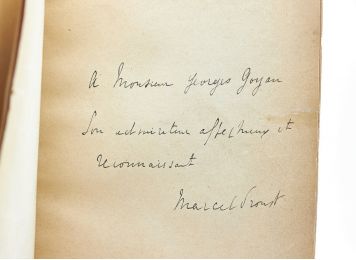 
Marcel PROUST & John RUSKIN
La Bible d'Amiens [The Bible of Amiens]
Mercure de France | Paris 1904 | 12 x 19 cm | contemporary shagreen
First edition of the translation, the notes and the preface created by Marcel Proust, one of the first numbered copies issued to the press.
Repairs and lack (filled in) to the first leaves, a good copy with fragile paper.
The copy is presented in a half red morocco chemise with flaps, spine in five compartments decorated with double blind tooled compartments, gilt stamped inscription: "Traduction Marcel Proust" (Marcel Proust translation) at the bottom, glossy marbled paper slipcase lined in red morocco, the set is signed P. Goy & C. Vilaine.
Precious handwritten inscribed copy signed by the author to Baroness Pierrebourg: "hommage de respectueuse reconnaissance" ("homage of respectful recognition...")
Baroness Marguerite Aimery Harty de Pierrebourg, writer and mistress to Paul Hervieu, held a brilliant literary salon where the likes of Raymond Poincaré, Henri de Régnier, Paul Valéry, Alfred Capus, Abel Hermant, René Boylesve, Edmond Jaloux, Gérard d'Houville, Edouard Estaunié, André Gide, Gabriele d'Annunzio and Robert de Flers met.
Regularly frequented by Proust, Madame de Pierrebourg's "Salon de l'avenue du bois" was, alongside that of her rival Madeleine Lemaire, and those of Madame Strauss and Madame Aubernon, the melting pot for several of La Recherche's psychological portraits.
However, Marguerite de Pierrebourg, or Claude Ferval by her nom de plume, was above all a novelist admired by Proust, in whom he confided, with each new novel she published, his admiration and his own desire to write. Thus, in a letter dated 1903, the moving commentary of a passage from Plus fort seemed to announce, ten years before La Recherche, Proust's future sacrifice to writing and, in the novel, Swann's failure to achieve this grace:
"In all this a philosophy to which we would like to return and ask you, for example, if it is really true that life gives us the grace that we desire on the condition that we sacrifice the rest to it. If we thought that sacrificing the rest could be used for something, it would be done quickly. But the rest is made stupid, preventing the pain that once faces from being seen. Indeed, it is difficult to say. But you are right."
This feeling that for him is still so "difficult to say," is precisely the very subject of La Recherche. And his outcome, the recapture of this life through fictional work, he will more easily formulate the imperious necessity in a letter to Pierrebourg in 1908: "You, you are a novelist! If I could, like you, create beings and situations, then I would be happy!" A statement echoed by Proust's question: "Am I a novelist?" at the beginning of his first notebook.
This year is also the year in which the writing of La Recherche began, the birth of which is found in this famous "1908 notebook."
More than a benevolent advisor, Madame de Pierrebourg will inspire the character of Odette (in so far as the first name Odette, borrowed from an autobiographical novel by Ferval) and she will be one of the most fervent supporters of Du côté de chez Swann.
Precious dedication that echoes that which Proust will address ten years later in the first volume of La Recherche.