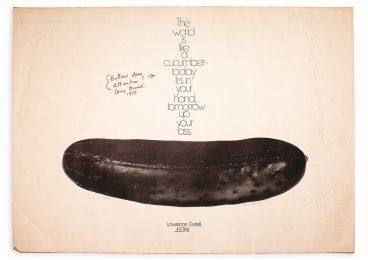 Original poster by Karen Horowitz numbered 145/200, dated 1974 and signed in pencil, showing a photograph with a superimposed quote from Lawrence Durrell's Justine: "The world is like a cucumber - today it's in your hand, tomorrow up your ass".
A few tiny wormholes.

Manuscript inscription in felt tip pen by Lawrence Durrell to the left of the quote: "Buttons dear Attention! Larry Durrell. 1978"

This poster was given to a young lover of the author's who, in both Sommières and Paris, livened up his lonely days at the end of the 60s and in the 70s. Janine Brun, also known as "Buttons" in the author's letters and postcards was described thus by Durrell's biographer Ian McNiven: "She was almost thirty but she looked much younger, with a girl's small-breasted figure, as dark-haired as Claude Kiefer was blonde, and not languorous but tremendously energetic" (Lawrence Durrell: A Biography, page 591).
Their affair stretched to the end of the 1970s, Jani/Buttons appearing now and then in the works of Durrell, most notably in the poem "Vaumort" (Collected Poems: 1931-1974) and in the author's famous correspondence with Henry Miller: "that little demon Buttons [...] turned up for a New Year TRINC and stayed the night with me finally, in my eternal little Room 13 at the Royal." (letter from Durrell to Miller, 6 January 1979). She also got postcards and letters full of solicitude, intimate allusions and suggestions for reading from Durrell and his great friend Henry Miller, as well as works of art signed by Durrell himself.