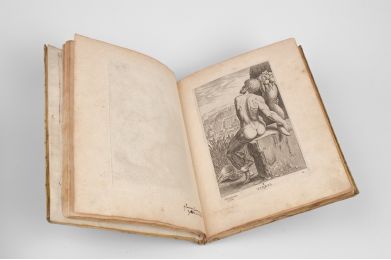 
THE FIRST EDITION OF THIS VERY RARE COLLECTION OF ENGRAVINGS, comprising two complete full-length series of marine gods and nymphs, published by Philippe Galle in Antwerp. There are a total of 34 plates overall, each 167 by 217 mm., engraved, numbered and titled in the copper plate, as well as two engraved titles. The first series of male gods, entitled Semideorum marinorum amnicorumque sigillariae imagines perelegantes in picturae statuariaeque artis tyronum usum was executed in 1586; while the second series, Nimpharum oceanitidum ephydridum potamidum naiadum lynadumque icons in gratiam picturae studiosae inventutis deliniatae sculptae et editae a philip. Gallaeo, devoted to female divinities, appeared the following year – 1587. A collection entitled Nimpharum icones did appear in 1583, but contains only 17 plates. The final engravings of the Nimpharum bear the signatures of Hiero Wierix and Ioann. Collaert.

Bound in contemporary Flemish vellum, ink title to head of spine. Contemporary annotations to the versos of some plates noting the identities of the figures represented. A few tiny wormholes to covers and endpapers, but not serious.

Philippe Galle (1537-1612), scion of an engraving dynasty, was one of the most important engravers and publishers of the Dutch school in the second half of the 16th century. A student from 1556 onwards of the erudite humanist Dirck Volkertsz Coornhert (1522-1590) in Haarlem, he succeeded Coornhert as the engraver for the works of Maarten van Heemskerck (1498-1574). The following year, he joined Jerome Cock (1518-1570), a printer, print dealer and publisher of artistic books,  in Antwerp. Galle in turn succeeded Cock as well, establishing himself as one of the principal engravers of his contemporary Pieter Breughel the Elder (1525-1569). At the centre of the engraving trade in Antwerp, Galle’s students included Hendrick Goltzius (1558-1617) and Crispin de Passe the Elder (1564-1637).

This fine collection of allegories showing the principle deities of the oceans, seas, rivers and streams, was – from a stylistic perspective – like a remarkable synthesis of Nordic naturalism and Italian Mannerism.

A journey through Germany, France, and Italy in 1560-61 was no doubt one of the sources of these eclectic influences. The qualities of the muscles of the females figures, reminiscent of Michelangelo, as well as the elongation of the figures (worthy of one of Parmigiano’s Madonnas) are testimony of the influence of the Italian High Renaissance and the beginnings of Mannerism. The expressiveness of the faces and complexions of the figures, in the tradition of Schongauer or Dürer, have a quality almost of Verismo, very much representing for their part a German aesthetic.
His acuity and concern for the realistic representation of the body and facial expressions are linked to Galle’s work as a portrait painter; he engraved from life portraits of a number of his Humanist contemporaries, among them Vesalius, Erasmus, Guillaume Budé and Thomas More. He was also noted as one of the first makers of a collection of portraits of learned men of the 16th century.
Throughout both sets of engravings, made up, by turns, of figures inherited from Classical mythology and personifications of various different European waterways, Galle manages to maintain a subtle play of facial features. From the Mediterranean flanks of the Nile (Nilus) to the northern banks of the Thames (Tamesis), the artist shows the diversity of the figures, each seeming to oscillate between Classical idealisation and Realist individualism.
The topographical or mythological iconography places each character within their myth or geographical environment – with an obelisk, pyramid and crocodile for the Nile, Neptune (Neptunus) with his trident, Charon’s boat traversing the Styx, Nereus (Nereus) surrounded by his daughters the Nereids, Lerne with its Hydra, Glaucos (Glaucus) contemplating Scylla, or Acis melting into the sea under Galatea’s gaze…

Galle’s collection is to be placed within the context of the development of allegorical scenes in 16th century art, particularly in the field of emblem books, the Aldine Hieroglyphica of Horapollonius of 1505, and the Iconologia of Cesare Ripa (1593).

There is a copy of the two collections of plates that make up the present work in Cambridge (but without a detailed description); the Nipharum icones is recorded in Netherlandish books by Andrew Pettegree and Malcolm Walsby. There is also a copy in Passau, one in the BNF, one in the National Library of Spain and one in the University Library at Erfurt. The University of Liége, which also has a copy, mentions only twelve engravings.
The other copies we have been able to locate only have the male suite and are held at the Cultura Fonds Library in Dilbeek, the British Library, and the Bodleian. The Metropolitan Museum in New York, the British Museum and the Rijksmueum hold only a few plates taken from the two series.

An extremely rare copy containing both complete sets of engravings, with engraved titles and wide margins in a contemporary Flemish binding.