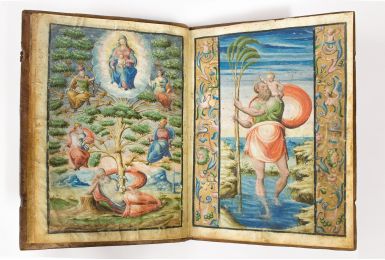 
No publisher | [Granada] 1569 | folio (21.5 x 30.5 cm – upper margin: 35 mm, bottom margin: 50 mm, interior margin: 30 mm, exterior margin: 40 mm), 31 ff. | 16th century full calf gilt.
Manuscript on vellum, comprising 31 leaves: 50 pages of text, ruled and lined and 3 full-page miniatures in colors, heightened in gold. The four final leaves were numbered and partly ruled but left empty. Contemporary manuscript ex-libris on front endpaper. In Spanish throughout, written in Caroline minuscule on 24 lines, the text is very readable and very regular.
The manuscript begins with a three-page summary covering the 24 chapters that comprise the Regla y constitutiones de la cofradia del Sanctissimo sacramento de la yglesia de San Christoval de Granada.
One decorated initial in red and blue, indents and pagination in red, small sketch in black ink to inner margin. The verso of the final page of the summary has been ruled and lined in red but left blank. There follow the three full-page miniatures. The first shows a Communion scene (on the recto of one leaf), the second the Tree of Jesse (verso of the same leaf), and the third Saint Christopher bearing the baby Jesus (recto of the following leaf).
The verso of the miniature bears a short manuscript text explaining that these rules are those of the confraternity and brotherhood of the Holy Sacrament, established in the Church of Saint Christopher of Granada on the 1st May 1568. This is followed by the «prohemio,» a prologue of two and a half pages in which the confraternity takes an oath; this starts with an imposing decorated initial in red and blue. The chapters then follow on directly, each with a tidy initial. The important terms are heightened in red, allowing for quick navigation in the text. A long manuscript annotation to the outer margin of leaf 24. The aforementioned rules take up 23 ruled leaves, ruled and lined in red.
Leaf 27 bears two manuscript privileges. We have not been able to read the signature on the first, dated May 1569, though quite elaborate. The second, later, one (May 1596), is signed by Justino Antolinez de Burgos (1557-1637), at the time the Chaplain Royal, charged with the inspection of ecclesiastical lodges. Long contemporary manuscript note to reverse of leaf 24.
Contemporary light-brown calf, spine in five compartments with gilt fillets and fleurons, gilt fillet frame to boards, small gilt fleurons to corner and a larger gilt fleuron to center of covers. One clasp preserved. A few very skillful repairs and regilding, practically invisible.
This manuscript has three spectacular full-page miniatures in gouache, heightened in gold.
The first shows the Holy Communion, with Christ himself establishing the Eucharist with the words «This is my body, this is my blood.» The Apostles and Jesus (with a halo) blessing them, are seated around a table set with bread and fish. This motif became a major theme of Christian art in the Renaissance, as this miniature also shows.
The second miniature shows the Tree of Jesse, which symbolizes the genealogy of Christ traced from Jesse («Xese»), shown as an old man reclining. In keeping with the iconographic tradition, a tree protrudes from his side, the main branches of which bear some of Jesus' ancestors. Here, they are: Zachary, Jeremiah, David, an unidentified King, and – at the pinnacle – Mary holding the Christ child within a mandorla.
The third miniature presents a scene with Saint Christopher – the patron of the Church in Granada to which the Confraternity of the Holy Sacrament was attached – with a child on his shoulders, as he was commonly represented. The iconography derives from a passage in the Golden Legend in which St Christopher helps a small boy cross a river. During the crossing, the child gets heavier and heavier, and the river more and more threatening: «You have put me in the greatest danger. I do not think the whole world could have been as heavy on my shoulders as you were. The child replied: 'You had on your shoulders not only the whole world but Him who made it. I am Christ your king, whom you are serving by this work; and to prove to you that I am telling the truth, when you go back to the other shore, plant your stick in the ground opposite your house, and in the morning, you will see that it has flourished and borne fruit'.»
This miniature is bordered on all sides with richly illustrated borders on a golden ground, typical of mediaeval manuscripts, showing Sphinxes and several types of anthropomorphic plants.
These miniatures bear witness to the influence of the Italian Mannerist artists on Spanish painters. One sees here the same graceful serpentine in the figures, the same attention to drapery (especially in the Communion scene) and a very similar color palette, with tones as delicate as they are vibrant.