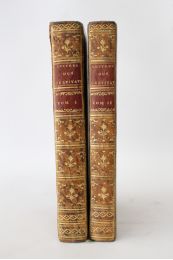 
First French edition. The first edition appeared in London, in English, in 1782. The French edition was nonetheless reworked, corrected, and translated by the author himself who then added a second volume and even went so far as changing the name of the narrator, James, to his own. What's more, the French edition is much more anti-English and pro-American.
Contemporary light brown marbled calf, spines gilt, red morocco title- and volume- pieces. Orange edges. Very good copies in very good condition.
Crèvecoeur (1735-1813) came to New France in 1755 as an officer and geographer during the French and Indian Wars. He fought for the French, then travelled extensively before eventually becoming a farmer in the British colonies. He was naturalized before the American Revolution drove him back to France. When he returned in 1783, he found his farm ravaged, his wife killed, and his two children gone. In terms of agriculture, he introduced the potato to Normandy and alfalfa to the United States. These letters are at the same time accounts of his journeys and the first work to describe life in America, including everyday life, education and customs, not by a traveler passing through, but a man of some experience who had observed and shared the life of the Americans. The book contributed to the forging of an image of American identity based on ingenuity, freedom, and equality. A number of French families embarked for America after having read this work. The book deals not only with the American West, a number of pages being devoted to Canada, Newfoundland, etc. There are also articles on Washington, Franklin and remarks on the War of Independence, slavery and numerous anecdotes. The work is dedicated to the Marquis de La Fayette.