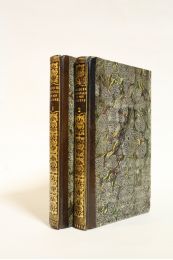 
first edition, posthumous, on Holland paper paper.
Subsequent binders (probably XIX) in full carton caramel, back smooth decorated with double gilt fillets as well as parts of title and volume number of red and black leather. Caps very slightly rubbed and a few bites scattered, otherwise beautiful copy.
The introductory text, in memory of Diderot , is by Jakob-Heinrich Meister, a friend of Necker and successor of Frédéric Melchior Grimm at the Correspondance littéraire .
The novel, conceived from 1765, appears precisely in serials in this review from 1778 to 1780. The published version is however not definitive, since Diderot did not stop increasing it until his death, and the the work which, in 1771, counted 125 pages, reached 200 in 1778, 208 in 1780, 287 in 1783. However, the work, well before its French publication, is already known in Germany thanks to the translation made by Schiller (in 1787 in his magazine Thalia ). Following this version, Doray de Longrais gave a French version of the same story. In 1792, Germany discovered the full text thanks to a new translation, that of Mylius. Finally, in 1796 is published in France the original text, according to a copy likely provided by Grimm or Goethe.