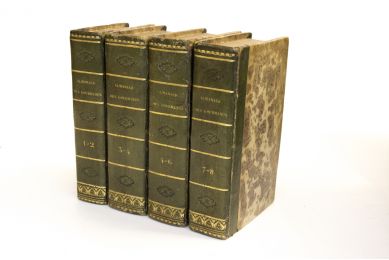 Near-contemporary half green calf over marbled paper boards, spines with blindstamped fleurons and gilt fillets and roulettes, gilt dentelles to foot, marbled endpapers and pastedowns. A very good copy despite rubbing to head- and tailpieces and some joints.
One tear to two first pages (endpaper and half-title) of volume three without loss to text.
A rare complete set of the eight years of this great guide to the gastronomy of Paris, “at the same time a cabinet of culinary curiosities, an everyday food guide, luxury dining, and literary collection.” (Allen S. Weiss)

Considered the very first culinary review, this work, whose numbers fit easily into one's pocket, had the goal of “guiding and enlightening gourmands through the labyrinth of their prandial joys,” across Paris, “that place in the universe where they make the best food.” Grimod de la Reynière was not content with merely listing the best restaurants in the capital, but offered readers a real culinary encyclopedia: “well-researched articles on what to eat according to the months and seasons, an itinerary with a sometimes severe commentary of the cafes, restaurants and grocers' shops make these Almanachs the indispensable companion of the Parisian on the move.” (Ned Rival, “Le goût prend la parole.” Revue des deux mondes, 1993, pp. 11-23)

The immediate success on publication of the Almanach made Grimod into a culinary arbiter: “suppliers and restaurants quickly understood the importance of this publication for their businesses and from the very first issue on, sent the author samples of their goods. There was such a great volume of these that Grimod had to eat them with his friends. From these informal gatherings was born the idea of a “tasting jury” which would judge the merits of all solid and liquid food creations and would then lead to a deliberation known as “legitimation”. The supplier could then, if they wanted, ask for a copy of the jury's verdict which they could display in their shop, and they might even have the honor of being mentioned in the next Almanach. The jury met no fewer than 465 times, for meals with up to 30 dishes and which lasted five hours!” (ibid.)

A very rare complete set in a uniform binding of this first culinary Almanach, the predecessor of the Michelin guide.