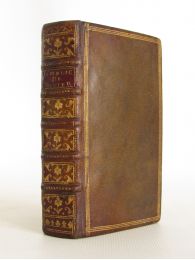 
First edition at De Tournes, after the first edition published in 1497 at Alde in Venice. De Tournes will publish successive reissues until the end of the sixteenth, these impressions are often less good and more common. "Admirable small edition in round letter, on paper of first choice". Cartier, of Tournes, I, 142.
Binding full morocco bronze eighteenth. Back with nerves adorned with 4 florets. Title piece in red morocco. Triple framing net on the boards. A slightly blunt corner, another with a hitch; another snag along the outer edge of the bottom plate. The color of the volume changes between brown and light bronze. Some rare annotations in the margins. Nice copy, fresh overall.
Rare exemplary morocco of the first edition of De Tournes.
Meeting of texts of Neoplatonic authors all translated and reviewed by Marcilio Ficino on the theurgic mysteries (the magical communication with the Gods, the demons and the superior ones) revealed by the study of the religions of Egypt, Assyrians and Chaldeans . This corpus will be a major source for the occult doctrines of the Renaissance. The collection brings together 13 texts of which the first is from Jamblique, the following from other Neoplatonic philosophers (Hermes Trimegiste, Proclus, Pythagoras, Xenocrates ...). The treatises of Jamblicus, Proclus, Psellus, as well as the Pimander of Mercury Trismegistus, are translated by Marsilio Ficino. The Asclepius is the translation of Apuleius.
From Mysteriis Aegyptiorum is the answer of Jamblic to Porphyry of Tire on the problematic of the Egyptian magic of the theurgy (knowledge and magic practices which make it possible to get in touch with the celestial powers beneficial, and to use their powers). The other treatises are a compilation of writings on magic, demons and occultism. The work is introduced by an interesting epistle in which Ficino says that magic can only be Christian.