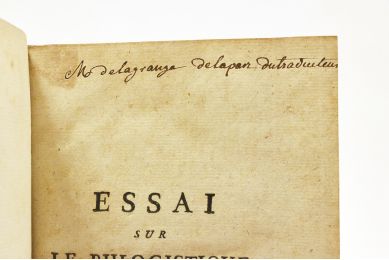 First edition and sole publication of the French translation and critical analysis under the direction of Madame Lavoisier of this text published in English the previous year under the title An Essay on Phlogiston and the Constitution of Acids. The work is made up of twelve sections, all followed by critical notes by Louis-Bernard Guyton de Morveau, Pierre Simon de Laplace & Gaspard Monge & Claude Louis Berthollet & Antoine François de Fourcroy.
Contemporary half light brown sheep over marbled paper boards, smooth leather spine decorated with gilt fillets and fleurons, morocco leather title piece. Very skillfully restored joints.
Interior in very good condition except for two marks left by bookmarks on pages 68-69 and 176-177.

Rare autograph inscription by Marie-Anne Paulze Lavoisier to Joseph Louis de Lagrange, prominent mathematician and loyal friend to Antoine Lavoisier.
Valuable record of the leading role played by Marie-Anne Paulze Lavoisier in the “chemical revolution” at the dawn of the French Revolution.
Phlogiston theory emerged at the end of the 17th century – conceived by Johann Becker and developed by Georg Ernst Stahl – postulating the existence of a “flame element” inherent in combustible bodies and released during combustion. This hypothesis was completely refuted by Lavoisier, who revealed the role of oxygen in the combustion process, thus inventing the theory of oxidation.

Irritated by Lavoisier's skepticism with regard to phlogiston theory, the eminent Irish chemist Richard Kirwan published this text titled Essay on Phlogiston. “[...] The French chemists who rallied around Lavoisier decided to respond by translating An Essay on Phlogiston into French.” (Keiko Kawashima, “Madame Lavoisier et la traduction française de l'Essay on phlogiston de Kirwan” in Revue d'histoire des sciences, 2000). This text, far from being a simple translation of Kirwan's work, adopted the form of a manifesto in itself in which the greatest chemists of the day contested phlogiston theory, dissecting its advocates' arguments one by one.

The huge success of the French translation led Kirwan to attempt to refute the objections of Lavoisier and his collaborators. In 1789, he published a second edition of his work, translating the French notes written by its detractors into English and adding his own refutations. He finally converted to the ideas of the anti-phlogisticians, the founders of modern organic chemistry.

Marie-Anne Pierrette Paulze – Mme Lavoisier – played a key role in the career of her husband, who taught her chemistry at her request; she then became his assistant, recording the experiments he carried out and their results.
She very quickly took on a role that went beyond that of the devoted wife, becoming a translator but also a writer: many of the notes in the Essai sur le phlogistique were written by her. At the height of her involvement, it was she – in her capacity as a skilled illustrator – who drew all the plates in Traité élémentaire de chimie (1789), appending her signature “Paulze Lavoisier Sculpsit” on this occasion.

This specimen includes a rare autograph inscription “by the translator” – Mme Lavoisier – to Joseph Louis de Lagrange (1736-1813), one of her husband's closest friends. It was Lavoisier who aroused the interest of Lagrange in the new science of chemistry. Together they participated in the development of a metric system that standardized weights and measures, which came to light during the Revolution. Working for the revolutionary government, Lagrange had more opportunities than his chemist friend, who was executed as a victim of the Terror. When he learned that Lavoisier had been killed at the guillotine, the mathematician declared: “It took them only an instant to cut off Lavoisier's head, and one hundred years might not suffice to reproduce its like.”