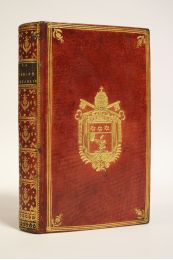 
Bound in full red morocco, flat spine decorated with jewels, pattern Star and flower, castors and golden lace, as an exhibit in black morocco, triple net gilded frame of the boards, gilded finials corner, gold badge in the center boards representing the papal coat of arms of Pius VI ( "gules money Zephyr blowing on a natural bouquet of lilies lying on a plain Vert, a chief argent three gold stars"). Fine golden hatching affixed roll on turns, double frame golden hatching on contreplats. Very small wormhole leading back, two small gaps without gravity on the cuts, smaller galleries to the second contreplat and last flyleaf, Central wetness on the second cover page, wetting coaching the second contreplat. All edges gilt.
Bookplate applied in relief as buffer on the second page of custody and bearing the inscription "The e Visconte The enor".
The book is presented as a succession of new criticism against theologians who, according to the author, abandoning spirituality to prefer materialism considered dangerous. willingly mocking, tone of Louis Etienne de La Croix is ??virulent attack when naming the two professors, one member of the prestigious theological faculty of the Sorbonne. This bellicose position potentially explains the rarity of this book. It is particularly interesting, in that case found that Pius VI had possessed a copy with a binder bearing his weapons. The pontiff is placed symbolically on the side of a theological tradition based on the transcendence of God's word and God the principle of all things, even human thought. Pope died in exile in Valencia following the occupation of Rome by French troops, he saw his rule overshadowed by growing tension with revolutionary France; This binding to the papal arms shines in a new light his pontificate and we part on information in its decision-theological positions.
Rare book set in an elegant binding in full red morocco struck with the arms of Pius VI.