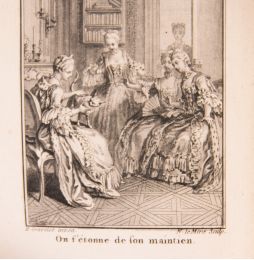 LAFARGUE DE
œuvres mêlées [Histoire géographique de la Nouvelle-Ecosse]
Chez Duchesne, Paris 1765, 9 x 16,5 cm, xix (1) 324ppet (2) viij, 359pp., 2 volumes, calf binding
First edition, with three fine engravings by Le Mire after Gravelot, a title vignette (repeated) and two headpieces.
Polished marbled calf. Spine in compartments. Light brown morocco title and volume labels. Tear with lack to lower joint of foot of spine of volume I. Small lack to upper joint at foot of spine to volume II. Two corners slightly bumped. A little rubbing. A very good copy.
The first volume is made up of various bits of occasional verse and other academic poems by Lafargue, as well as a treatise on oratorical pronunciation. Of greater interest is the second volume, which begins with a treatise on the reading and above all translation of the Histoire géographique de la Nouvelle-Ecosse [General History of New Caledonia or Acadia], an anonymous work based in part on Charlevoix’s Histoire de la Nouvelle-France [History of New France]. The author gives a precise list of bays, ports, goods and production, a history of the trade there and the importance of its geographical location for the security of New France, since New Caledonia formed a peninsula in front of Quebec. The author also gives an overview of the relations and conflicts between France and Britain over this territory. An important account and without doubt the first on this region of the North-East of Canada, which became home to a number of people from Poitiers, who shaped the language of Acadia, and 12,000 of whom were deported in 1755 to other British colonies.