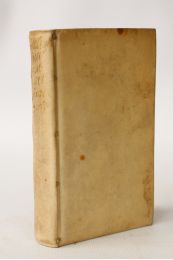 
Edition anonymous. The book bears the number 2023 catalog elzéviriennes editions (Willems, Vol. II). For the author, see Barber, Dictionary of anonymous works. Vellum full time with flaps. Smooth back. Title to red feather dimmed. Rolland Vayer Boutigny (1627-1685) was Master of Requests of Louis XIV and one of his influential advisers. Author of novels, plays and short stories, as well as political and legal treatises, we find in this book that was Boutigny lawyer. Peculation is the theft of public funds made by those in the administration, he was put to death by the Roman law, but was not under French law. "Under the old regime, that ministers were convicted for embezzlement and extortion! As justice rooms were established to disgorge financial looting the treasury, complicity areca superintendents finances! "(Dictionary of criminal law, Doucet). The Treaty of embezzlement scandal, was accused Boutigny defend Fouquet, who a few years earlier had been arrested and accused of embezzlement, which is why he wrote these observations in the form of dialogue, in which he discusses the validity of the punishment, banishment, and the history of French law regarding the embezzlement ... --- Please note that the translation in english is done automatically, we apologize if the formulas are inaccurate. Contact us for any information!