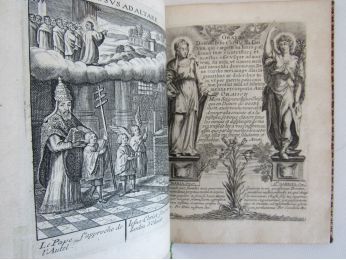 
Second edition with the privilege of 1653, rare. Entirely engraved work of 92 pages (with text and figures), and illustrated with a portrait of Charles de l'Aubespine by Guillaume de Gheyn, with a beautiful frontispiece by Collin. This edition differs from the first by some notable points. Besides the engravings are less inked and more worn, the 35 parts of the mass have been retouched
The first part consists of 68 pages: the litanies. It consists of a frontispiece, a figure to the left of an episode of the mass and to the right of an oration (French and Latin) with two figures of saints on foot. The book continues with other litanies on 4 pages with figures of saints, then a litany to Jesus, with his portrait, then a litany to the virgin also with a portrait; the texts are located at the center of scenes historiated in a frame. Finally 8 engraved pages of psalms with 7 historiated scenes in a large frame. It is missing 3 sheets in fine to our copy, the sheet of privilege and 2 pages of the confession and holy communion which resume the engraved frames of the preceding pages.
Binding full red morocco contemporary. Back to nerves adorned with the grotesque. Plates decorated with a succession of 4 frames consisting of three nets and angular irons. Upper headdress removed. 2 blunt corners. Traces of clasps with small gaps. Friction. Doodles on the front pages. Nice copy, fresh.
Manual of exemplary mass in religious illustration and the spiritual life of the seventeenth century. The spirituality of the collection rests on the mystical assimilation of the acts of the Passion and the phases of the sacrifices of the Mass. "One of three important publications whose engravings are indicative of the characteristic trends of religious illustration at that time. "Jeanne Duportal (Studies on the books with figures of the XVIIth century).