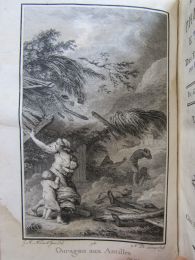 
Third and final edition, the best and most complete to the text, bringing the number of volumes published until 10 against 7. The work appeared in a luxurious version, in 4 (some prints in-8 were also thicker paper and higher quality, it does ours) and a more modest version. Ten headpieces by Moreau Young whose portrait of Raynal Volume 1 by Cochin regravés by Lardy.
Demi Havana contemporary sheepskin in small corners. back smooth decorated with gilded nets, part of title in red morocco, and volume number in black leather. Scattered spots.
Published for the first time in 1771 in 7 volumes, the Philosophical History of the Indies was a huge success throughout Europe and America; its success is mainly due to the severe criticism of colonialism, exploitation, slavery and mercantilism. He was sentenced to be removed by order of the Council of 19 December 1779 and sentenced to the fire by decree of the Parliament of Paris on 25 May 1781. Book emblem of the Enlightenment, posing as a history of international trade, The work is before any violent rant against European colonialism and arrogance, slavery and enslavement of peoples, against the church which assists in European hypocrisy. We now know that Diderot worked from the first edition and has overseen the organization of texts, he perfected in the third edition (adding many texts from his pen and that of other employees, such Holbach), transforming the initial work in a real war machine of the party philosophers. The book is also not qu'accusations, instead it seeks and craves even peaceful solutions, agreements between nations. The story does not deceived because it lives in Raynal a promoter of the French Revolution.