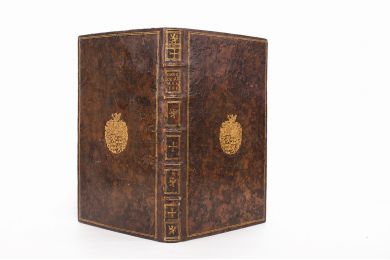 
First complete edition, partially original, printed in in-4 format, in italics and presenting the mark of Robert Estienne on the title page. This collection contains 80 pieces more than the First edition 1569. Works Only our edition is indicated by Tchemerzine. Our copy is complete of the sheet a ii , often missing.
Posterior Binding (early seventeenth century) in the calf mottled brown, back with five nerves decorated with iron griffin and cross fleur-de-lysed, double net gilded framing boards struck them weapons center Cauchon and of Hesselin, all slices speckled with red. joints and upper inner corner of the second flat skillfully restored with gilding recovery. Small worm work affecting the joint of the last nerve of the first board. Three joints of nerves of the second flat slightly rubbed. A few small wetting and wormholes narrowing in the inner margin of the volume. A small angular wetting without attacking the text on the margin of the sheet 93.
Precious signed copy of Louis Treslon-Cauchon said Hesselin (1602-1662), advisor to Louis XIII, master of the House to the money and superintendent of pleasures of the King.
A great bibliophile, famous for his wealth, he was also a lover of works of art and paintings. "Hesselin was a great figure at the court in the middle of the seventeenth century. He was the man of taste par excellence [...]. Very fond of beautiful curiosities, he had made his house quai des Bethune, in the Ile Saint-Louis, a real museum. [...] I call his cabinet all his house - says Father Nicéron, author of "The curious prospect" - because it is truly adorned and filled with so many rarities, [...] so rare paintings and pieces to to delight, [...] so many good books in all kinds of science, that one can say it the abridgement of all the cabinets of Paris. Hesselin died poisoned by a servant in 1664 [...]. The books of his library meet with difficulty; they are usually connected in tortoiseshell with his arms. "(Bonnaffé, Dictionary of French fans in the seventeenth century, 1884).
An emblematic figure of the Poitevin humanism, Scévole de Sainte-Marthe became very young with Pierre de Ronsard and had as his friends illustrious figures of the Pleiades such as Jean-Antoine de Baïf and Remy Belleau.
Provenances: Long bibliographical note of the hand of the Baron Pichon - one of the owners of the volume - on the first guard: "The weapons that are on the plate of this volume are quartered with Cauchon and Hesselin. The Cauchon branch of Conde were from the Treslon branch and died in 1664 in the person of Louis Cauchon dit Hesselin . V. my note on him in the journey of Lister 1873 in-8 p. 247 (1897, No. 812). Hector de Backer Library (cat 1926, n ° 580) Bookplate Gianni de Marco pasted on the first contreplat, his dry stamp on one of the white guards.
Beautiful copy established in a binder with the arms of one of the most influential French bibliophiles of the seventeenth century.