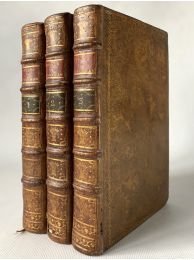 
Original French edition published simultaneously with the edition in 4, from the same publisher. It is illustrated with a folded frontispiece, a large folding map of Cape Town and 15 plates, some of which are folding.
Binding in full Rooted brown contemporary sheepskin. Back with nerves decorated with a bouquet of wheat. Piece of tan calf title, pieces of green veal number. Frame caster on the boards. Small snags at the head of volume 1, with the upper joint open head. Snags with missing tails of volume 2. Freckles on cover pages and false titles. Some freckles scattered in the volumes. Beautiful copy.
A Swedish naturalist, Sparrman was appointed scientist for a trip to the Cape and was supported by Linnaeus. He went there in 1772. Captain Cook, who was calling at Cape Town, offered to join him on his voyage around the world, which he undertook from the east. He did not return to Cape Town until three years later, in 1775. There, while practicing medicine and surgery, he studied fauna and flora, pushed several expeditions into the interior of Africa, while amassing a formidable naturalist collection which he brought back to his country at the end of the year 1776. The whole is very rich in description and the pen of Sparrman is simple and clear, without affeterie. Circumnavigation occupies 2/3 of volume 1. The rest being devoted to Africa and Cape Town, to the many naturalistic observations, to the populations and their customs, but also to the way in which Europeans live in these countries (Dutch, German ...).