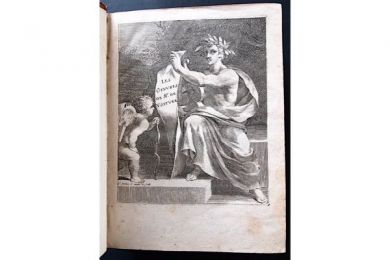 
Fifth edition of Car Works, whose original was published in 1648; and original edition of the New Car works. Mellan a frontispiece to the first volume, a headband and a drop cap in the epistle and a beautiful portrait of the author by Champaigne engraved by Nanteuil.
Binding in full brown sheepskin period. Back ornate nerves. As an exhibit in red morocco. A lack headdress. Hitch with the upper jaw missing tail. Frottements.Bon copy.
Car is first of all a style, not only in his letters (love letters), and his poetry but also in his prose, see for example the delicious Metamorphoses. His works were the image of man, gallant, teaching fine language and good manners to those familiar with the Rambouillet hotel. His fame was great during his century and remains an emblem for the seventeenth century.