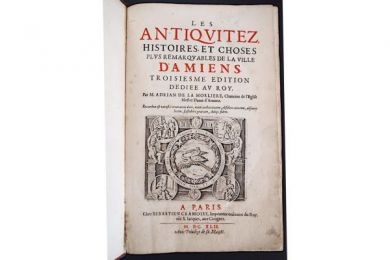 
Third and best edition, the most complete, containing edition of the Compendium of illustrious houses of the Diocese of Amiens with its own title page with the date of 1642 Both books were published in less complete versions, respectively in 1621 and 1630 The second book is the location after each name weapons that have not been printed but are described in the margin; rare examples have illustrated these hand colored weapons. Major brand of printer on the two title pages. First title page in red and black. Half-title between each part of the first livre.Demi Sheepskin early twentieth marbled pastiche of antique binding. Spine ribbed highlighted nets cold. Part of title een red calf. Friction caps, bits and corners. The general half-title has been doubled and restored in low margin by a strip of paper ancienne.Adrian Morlière, canon of the cathedral of Amiens gathered throughout his life an awful lot of material on the history of his city . The book proceeds in the form of articles and does not use the classic but summary of the annal form, but the autograph dedication of the authors have a time evolution, Roman to modern times. We distinguish a catalog of the bishops of Amiens, the Counts and Governors or Lieutenant of the city. The Treaty on the Houses of Picardie contain valuable information. In addition to the historical, the author added to the end of each part of many poems of his own. Although the focus is mainly put more on the history of the city, there are many sections on churches, the ramparts and the description of the city. "Although the 'book The Morlière is poorly written, but it is useful & necessary, and even rare" notes Lenglet-Dufresnoy. At today's reader, the book will mainly appear messy in its first part, but full lessons on the city. --- Please note that the translation in english is done automatically, we apologize if the formulas are inaccurate. Contact us for any information!