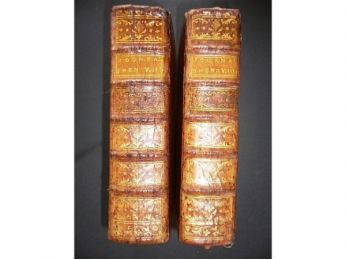 
New and rare edition, illustrated with 15 figures by Harrewyn, including 13 portraits. Title page of Volume I in red and black. All first editions of this book were published in Hammer (Louis Elsevier); we do not know the true address it. This edition, after consultation copies identified in libraries does not always contain the figures, and when she has (the copy of the British Library), it is counted as 13 without the two figures of the priest mild and The one built into Witchcraft Henry Valois. In addition, the notice to the binder has only 12 portraits. All these figures are contained in Volume I, Volume II is occupied by remarks Duchat and Denys Godefroy and many texts that were not included in previous editions. Full Sheepskin blond marbled time. Back tooled raised. Part of title morocco beige. Upper joint of Volume I cracked head. Volume II of the upper joint split into head and tail. Volume II of the lower joint cracked. Meeting violently satirical and critical texts on Henry III, the Queen Mother, Queen Margot and the court; all constituted from the company in 1621 as a few gleaned from the books of Pierre Louis Servin Estoile texts. Pierre L "Estoile (1546-1611), Secretary of the King and Grand audiencier of the Chancellery of France, was a witness to all the events and intrigues of the reigns of Henry III and Henry IV. It increased the number of texts in many editions, letters of Henri IV, the wonderful speech (of Catherine de Medici, Charles Estienne). interest naturally history of all these texts, often contemporary League, is the same as that found in the Satyr Ménipée, that the quality of the texts were due to large birds, such as that of D'aubigné. --- Please note that the translation in english is done automatically, we apologize if the formulas are inaccurate. Contact us for any information!