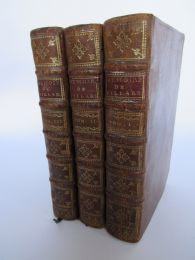 
Second edition, after the original was published in 1734 in one volume. Title pages in red and black. Another edition was published on the same date at Pierre Gosse in The Hague.
Binders full speckled calf contemporary. Back with nerves decorated with florets 4 caisonnés. part of title in red morocco, and volume number morocco tan.
Written by Father Margon, these memories make up the biography of a great military whose career began at fifty, during the wars of the Spanish succession. Villars became Marshal of France in 1702, after his victory over the Prince of Baden. It is made of Villars in 1705 duke and peer of France in 1709. In 1712, for his surprise win Denain, it saves the armies of Louis XIV of defeat. The same year he became governor of Provence, a position he held until his death, when his son succeeded him. It is in 1733, a year before his death he received from Louis XV supreme dignity for military, Marshal-General of the armies of France.