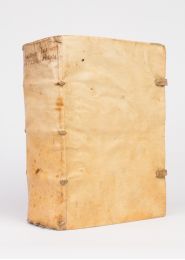 VEGA Garcilaso de la
Le Commentaire royal ou l’Histoire des yncas, roys du Peru
Chez Augustin Courbé, Paris 1633, in-4 (16 x 23 cm), (2 f.) (44 p.) 1319 pp. (32 p.) (1 f.), contemporary vellum
First French translation by Jean Baudoin, following the original Spanish, which was published in 1609 in Lisbon. This translation is only of the first part of the Commentaire royal; the second has apparently never been translated. The frontispiece shows a Peruvian city in the upper portion, most likely Cuzco, with a procession celebrating the various forces of nature. In the lower portion are two Incas, named as Manco Capac and Mama Occlo, framing the title; above are two vignettes showing jewels, and a caravel. The plate is normally signed M.L. (the L here has been erased) for Michel Lasne, a French draughtsman and engraver who was best known as a student of Rubens’.
Contemporary vellum, spine in four compartments with ink title to head, corners very slightly bumped. Small damsptains to head and foot of inner margin throughout, wormtracks to pp. 867-977 and 1269-1286, slightly touching the numbering of the quires in places, but not the body of the text.
The frontispiece sums up the themes of the text in showing the riches of a land conquered by the Spanish, all the while foregrounding key figures of Peruvian history.
The man on the left, Manco Capac, is traditionally considered the first emperor of the Incas at Cuzco. Mama Occlo was his wife. In putting these two mythical figures of the founding of Inca civilization at the very front of his work, Garcilaso de la Vega (1539-1616) confirms his intention of going all the way back to the quasi-mythological origins of the Peruvian people. Himself the illegitimate child of a Conquistador and an Inca Princess of the Capac line, and brought up in two different cultures, de la Vega offers here a history of the Incas both before and during the Spanish conquest, highlighting his privileged position as a direct witness of the events. As he points out in his notice to the reader, the historians who had gone before him “had only vaguely touched” on certain things he considers essential for understanding the history of Peru. Meanwhile he, as a “native of Peru & perfectly brought up in the language of the Court, which was spoken in Cuzco in his day, where he spent the better part of his years,” also has the advantage of bringing to his historical work a serious methodological approach (“in doubtful matters, he never claims anything for certain”). Above all, this is a unique view of Peruvian history for the time, insofar as the author does not privilege a Eurocentric view unlike his contemporaries, but regularly takes instead the view of the Native Peruvians looking back at their own history. It is no surprise that his work is still used as a reference work by historians of Latin America.
First edition in French of a major text on the Inca civilization.