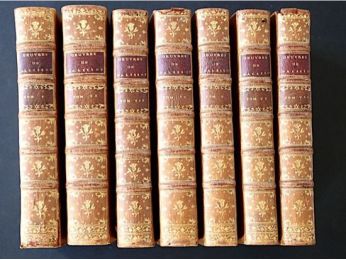 
Mention new edition, considerably increased. Indeed, it has been added to this multi-volume edition, in addition to the figures. llustrée a portrait by Monet frontispiece of Volume I and Figures 4 Meon. Volumes II: 4 figures Meon. Volume III: 10 figures by Monnet. Beautiful illustration, neat and fine. Edition remarkably executed.
Full Calf icy blond contemporary. Back tooled raised. Part of title morocco garnet and volume number in red leather (with wheels). Roulette and tail cap. Triple Net framework on boards. Upper jaw fragile tail of Volume I; This volume also includes a small scratch with tail missing. A lack of a cm ahead of Volume IV. Volume III of the lower jaw split tail (three wormholes along the jaw). A snag with the lack headbox of Volume VI. Hat Volume VII fragile head. A corner waned Volume VII. Despite these shortcomings, nice set to desirable appearance.
Although it can not truthfully be described as important literary production Palissot, it was undoubtedly a major figure in the literary life of his time; and the various parts, notes, comments, letters that frame every comedy (the editing is very rich from this point of view) are remarkable for the literary life of the second half of XVIII, including with regard to the famous quarrel philosophers whose Palissot was originally attacking outrageously in his eponymous play (probably poorly designed to dramaturgical point of view, but excellent in his writing, each making mockery fly).
Besides theater and poem The Dunciad, the volumes contain literary memoirs (dictionary of characters letters), correspondence with Voltaire (he was protected in his early career), critics of his contemporaries (Freron, Piron Duclos ...). We identify for tastefully criticism from his contemporaries on his own pieces. Palissot was probably an upstart, with incredible for controversy and ridicule talent, and as much for flattery; this edition of his work retains the greatest interest in the world of letters of the second half of the eighteenth. --- Please note that the translation in english is done automatically, we apologize if the formulas are inaccurate. Contact us for any information!