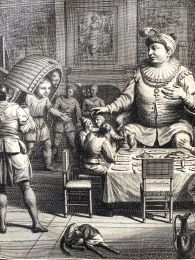 
New edition, illustrated in the first print of 3 frontispieces, 3 title vignettes, three plans and 12 superb plates, 12 header and 12 culs-de-lumière by Bernard Picart, engraved by Folkema, Picart, and a portrait engraved by Tanjé . The first three figures of volume I represent the interior of the house of Rabelais. Very beautiful ornaments in the Renaissance taste. The portrait of Rabelais engraved by Moncornet and belonging to another edition has been added to p. XXXVI of volume I.
Binding in full marbled and glazed brown calf of the time. Ornate nerved back. title labels in red morocco, number pieces in red morocco. 2 blunt corners. Traces of friction. Freckles with a few planks and halos on the edge of several sheets in volume III. Overall, very nice copy.
The edition of Le Duchat and La Monnaye originally appeared in 1711; it was then the best edition ever published of the works of Rabelais; The Duchat indeed established the text according to numerous editions (Brunet specifies that he unfortunately did not have the best editions at his disposal). The Duchat added a comment and precious notes to it. But what makes the price of this edition is the truly remarkable illustration of Picart whose figures are particularly fine and skillfully staged. The third volume contains various pieces, letters, reviews, praise ...