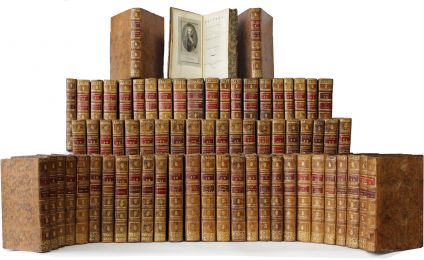 
Edition called "Kehl", the most famous editions of the works of Voltaire, on large paper and illustrated with 114 figures. She was shot in five different and only paper drawings on large paper prints possess, it is naturally best most sought after and rarest. A title-frontispiece with the bust of Voltaire, a dedication with the portrait of Frédéric Guillaume by Pourbus, 12 portraits and 93 figures by Moreau, engraved by Baquoy, Croutelle, Dambrun ... Our copy contains 7 figures more than the description Cohen.
uniform time Binders half marbled fawn sheepskin with corners, back smooth decorated with wheels and gilded florets, yellow slices, a piece of pink morocco title and a second tan morocco with the name of the author in black mosaic . Some friction on the back with small gaps, some caps and damaged joint.
The Kehl edition was created in 1777 during a visit to Panckoucke in Ferney, during which the latter obtained permission to Voltaire (who will work with him two years before he died). Panckoucke, whose political and logistical resources are insufficient, sells the rights to Beaumarchais, which put in place considerable resources: purchase of characters Baskerville, setting up subscriptions and lottery, annexation of the fort of Kehl (rented twenty years for the occasion!), buying a dozen presses ...
The edition of this great work will ruin Beaumarchais who nevertheless wrote: "Europe will be satisfied and I have lost 600,000 pounds [...] for five years. I had the courage to take bold word to Europe. "

Source: Library of Prince Starhemberg.
Prince Starhemberg, (1724-1807) was Austrian Ambassador to France with Louis XV and Minister Plenipotentiary at Lisbon, Madrid and Brussels where he allowed the creation of the Imperial and Royal Academy of Science and Letters in 1772. Spirit enlightened friend of the Marquise de Pompadour and great admirer of Voltaire, he was also charged by Joseph II to prevent the Cardinal from Frankenberg to restrict printing works of Voltaire and Raynal the Netherlands.
Bookplate "buffer" STARHEMBERG (XIX) in the first volume. Covered by a bookplate later (OB) in the other volumes.
Very nice copy in uniform vintage binding, an important source.