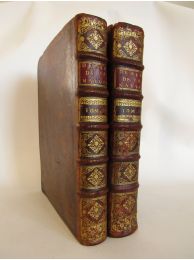 
Second edition of the French translation of Jean barbeyrac, after the first published in 1706. Title pages in red and black. Absent to Brunet who speaks only editions of 1720 and 1734. The work in Latin was published for the first time in 1672. A portrait of the author frontispiece, which was not in the first edition, and a vignette by Rademaker.
Binders in full brown sheepskin contemporary. Back with ornate nerves. Title pieces in red marroquin, pieces of tomaison of ornate brown sheepskin. 2 deficiencies at the head of volume I, at the height of the upper and lower joints. 4 corners a little dull. Very original slot at the upper bit in the tail of Volume I, 1cm. Browned pages, others with burns. Overall, good copy.
The most famous work of the author who made him consider as the founder of the science of public law. A great classic of the theory of natural law, Pufendorf prolongs Hobbes's reflections on the contract which binds the people to the sovereign by setting limits to absolutism, he considers peace as one of the determining principles of natural law. As for international law, Pufendorf deepens the notions of just and unjust wars. The author innovates on many points, first of all natural right is for him inherent to the human condition that makes man a sociable being. Society becomes a moral being based on conventions and formalizes the social contract. In addition, the author seeks to found a science of law, relying on a mathematical method revealed by Cartesian philosophy.
Jean Barbeyrac, austere and Protestant scholar, professor of law in Lausanne, had also translated the law of war of the other great jurist of the time, Hugo Grotius., His critical reading of the text is very important by his many notes of bottom of pages. We will read his long preface containing his commentary on the work of nearly 100 pages.