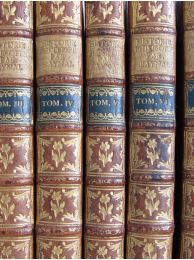 
New edition, reprint of the third edition at the same publisher, the best published so far, partly original, the most luxurious and especially the most complete. Illustrated with a beautiful portrait on the frontispiece of the author by Cochin Le Jeune, and a frontispiece for each volume of Moreau Le Jeune, engraved by De Launay, Delignon and Simonet. The volumes also contain the 23 collapsed tables (trade statistics), which are usually found in the atlas, published separately, but could be acquired with this edition.
Binding in full Dutch blonde sheepskin vintage. Back with ornate nerves. title label of beige sheepskin, piece of black sheepskin tomaison. Headdresses of the volumes I, II and VII with small gaps or partially removed.
The emblem of the Age of Enlightenment, presenting itself as a history of international trade, The work is above all a violent blast against European colonialism and its arrogance, slavery and the enslavement of peoples, against the church that lends its competition to European hypocrisy. The result was not long in coming, and the book was burned in a public place in Paris. We know today that Diderot collaborated from the first edition and that he supervised the organization of the texts, which he will perfect in the third edition (by adding many texts from his pen and those of other collaborators, D'Holbach), transforming the initial work into a veritable war machine of the party of philosophers. The book is by no means accusations, it seeks on the contrary and implores even peaceful solutions, agreements between peoples. The story was not wrong since she lives in Raynal a promoter of the French Revolution. It is an extremely rich work, an encyclopaedia of European travels and a colonial history.