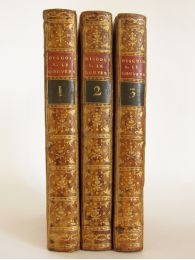 
New edition, after the first French edition of 1702, the original English dating from 1698.
Binding full brown sheepskin marbled vintage. Smooth back decorated. title labels in pink morocco, pieces of tomaison in brown morocco. Hook with missing tail of volume 3. A hole in the tail of Volume I, and along the joint of Volume 1. Traces of friction. Very nice copy.
The work of Algernon Sydney was immediately imposed, at the end of the 17th century, and particularly in the Protestant environment to which the author belonged, as a major contribution to republican thought, and it will become a classic of political thought in Eighteenth in which many authors will draw. Many protagonists of the American revolution declared it a "manual of the revolution". Opposed to Cromwell's despotism, to the absolutism of kings, long in exile, Algernon Sydney will end up as a republican martyr, decapitated in England after a specious trial. These discourses were written between 1681 and 1683 and circulated in manuscripts before being published posthumously by John Toland, philosopher and determined propagator of English republican ideas. Sidney first states that laws are above kings. We find these ideas and its language in revolutionary discourse, such as the freedom of peoples to self-determination. Pierre-Auguste Samson writes in his preface to the end of the eighteenth: "He had in view to establish the rights of peoples, to show them that they were born free, that it depended on them to establish such a form of government which they have thought to be the most advantageous to them: that liberty is the most precious treasure that men can possess on earth, that they must put everything in use to secure possession of it, and that it absolutely depends on them to change the form of their government, if they see that it is necessary to maintain and strengthen this precious freedom without which all the other goods of the world should be considered only as golden chains. "