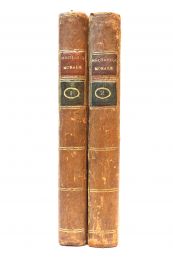 
First Edition. Rare. Absent the BN of France. Full Veu contemporary. Smooth back to the net. Parts of title and volume number of red and black. Fillets border on covers. Gilt edges. Some frictions. Antoine de La Salle (1754-1829), philosopher and scientist, was certainly one of the most interesting thinkers of his time, his ideas, sometimes whimsical and messy made him the leader of the physico-moral school. The share of physiognomy naturally has an important role in this theory. The Mechanics is both a classic treatise of physiognomy, and another to consider the relationship between the moral and body way from an educational perspective. Besides this, the Mechanics is also a treaty of understanding and logic, there are theories about the phonetics and linguistics, in short everything related to human, moral, intellectual and physical. The room had an eventful life, made many trips, visited America and Asia, studied the relationship between Buddhism and Christianity, wrote an unpublished history of China, and learned Arabic. Then, having left the Navy, he surveyed Europe, living in Spain and Italy before returning to settle in Paris where he devoted himself to philosophy and science. --- Please note that the translation in english is done automatically, we apologize if the formulas are inaccurate. Contact us for any information!