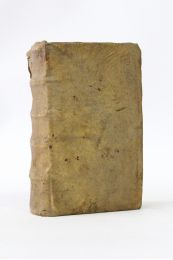 
New edition. The work was blacklisted and was republished in 1575 in redacted form and editing that we present is not so no. The first French translation seems to have appeared in 1527 as a copy of the University of Glasgow, although contradictory data gives 1528 as the date of the first French edition in Latin by Robert Etienne. Rare, like all editions. Absent from the BNF and French catalogs (except for one edition in Lyon 1586), as many libraries. It was impossible to find the date of the original, certainly in the early years of the sixteenth in Italy, although Gregory gives 1571 for the first edition ...? Brunet gives 1499 as the date of the first édition.Impression Italic. Vellum full time. Polydore Vergil (1470-1555) was born and died in Urbino, after studying in Bologna and Padua, he became secretary to the Duke of Urbino and the chamberlain of Alexander VI. His first two writings made him famous and won great popularity 'Proverbiorum Libellus' and' De Rerum inventoribus', translated into French by 'The inventors of things. In 1501 the pope sent him to England, becoming intimate of Henry VII, the latter ordered him a history of England by which Polidoro became the first modern historian, not content to make a simple but chronic student events and he influenced all future historians and even Shakespeare in his vision of the story. He returned to his native country during the religious changes in England. (Catholic Encyclopedia). In the form of articles, it is treated with all kinds of inventions, salt, pottery, paintings, linen, music ... The book is also a history of medicine and magic. Polydore Vergil naturally drew on much the Ancients. Some worm holes on the back, a tear at the top of Vellum. --- Please note that the translation in english is done automatically, we apologize if the formulas are inaccurate. Contact us for any information!