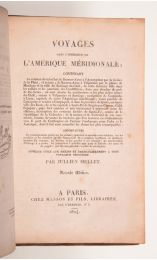 MELLET Jullien
Voyages dans l’intérieur de l’Amérique Méridionale [...] [Journeys to the interior of Central America: including those from Buenos Aires to Assumption by way of the Plata river and back, from Buenos Aires to Valparaiso by way of the Mendoza plain and the town of Santiago de Chile, into the valleys and peaks of the Cordillera over a distance of almost 450 leagues, containing some of the richest mines in Chile, the return from Valparaiso and Santiago, the navigation of the Coquimbo to Lima, the capital of all Central America, the tortuous route from Lima to Guayaquil, and around Quito province, including to an ancient Inca city. Also including the voyage from the aforementioned capital to Santa Fe de Bogota by way of Cuença, Calil, and Popayan, an extraordinary and interesting region in terms of its trade, a description of the environs of Santa Fe, the centre of the Colombian Republic, as well as of the nature and liveliness of its trade, likewise for all the territory on the way to the port of Cartagena, where the author embarked for Cuba and Jamaica, whose most remarkable features he also records. With detailed accounts of the mores, customs and character of the inhabitants, local products and the riches of the vast expanse of this new continent, the best way of travelling there, the best places to stop and pause, the merchandise to take for exchange, as well as worthwhile precautions against being cheated by the inhabitants and against the innumerable reptiles to be found there; a useful work for sailors and for any commercial traveler]
Chez Masson et Fils, Paris 1824, in-8 (13 x 20 cm), vi, [7]-291, [4] pp., contemporary sheep
Marked the second edition, the first apparently being that of 1823 published in Agen, with a slightly different title. Rare. This second edition appears to be even scarcer than the first. Held only in the Bibliothèque Sainte Geneviève in Paris. The French Bibliothèque Nationale and the British Library, as well as UK libraries hold no copies. The Bibliothèque Nationale and the British Library each have only one copy of the first edition.
Contemporary light brown sheep. Spine with 2 compartments with grotesques, 2 fleurons and roulettes. Red morocco title-piece. A one centimeter-long split to head and foot.
The author spent 12 years in South America. He left in 1808 on the brig Le Consolateur. “Obliged to move endlessly through the various provinces of this vast tract of the New World, I began to study the mores, characters, and habits of its inhabitants. I was particularly keen on learning how to travel in these climates...and lastly the various branches of commerce undertaken there.”