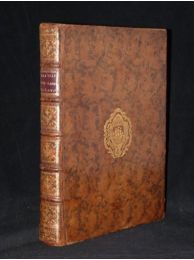 
New edition, rare, partly original and most comprehensive published as revised and extended until 1770, the book is illustrated with two portraits, the first - unsigned - Armand Jerome Bignon, the provost The second Colonel Augustin Eugene Hay by Lambert. 43 engraved plates in copper-fine representative of the officers; the third has never been engraved, the first is enhanced by hand with watercolors. Some copies, very rare, were printed in folio and have boards coloriées.Plein speckled vintage blond calf. Back with five nerves decorated coffered and gilded finials, and a piece of red morocco. boards with arms of the city of Paris. All red edges. Negligible friction. Some foxing mainly affecting the first leaves. A half-title page missing before Magistrate or school of the soldier. Beautiful exemplaire.Recueil established by two colonels of the guard of successive city. François Drouart he published the first edition in 1658, and Eugene Augustin Hay published in 1770 this edition completed by additions to the last century and enlarged treaty illustrated, Education or School of the soldier. The appendix contains a description of the custody of Paris and new uniforms. --- Please note that the translation in english is done automatically, we apologize if the formulas are inaccurate. Contact us for any information!