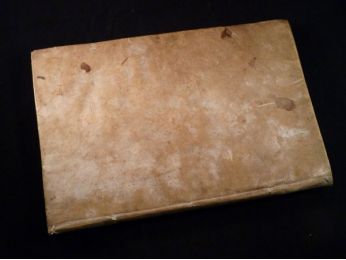 
first edition (edition of 1766 is a fictional statement for 1770) illustrated 25 boards calligraphy, the last three are the different alphabets, Samaritan, Arabic ... well above the three boards are boards engraved (dècor capital letters). Note p. 40 great vignette representing an alphabet in a circle whose center is a star. The following title sheet is also engraved plate is the dedication to the king, with his medallion portrait, a succession of loops form the character and decor. We were unable to determine if this first edition contained the portrait of the author found in the editions of 1770, which also have significant differences from the first edition.
A single copy of the BN France 1768, none in French catalogs. The British Library has a copy of the edition of 1766 (1770) and another one from 1768.
Scroll of flexible full time. Smooth spine with title along with pen, faded and difficult to read. Some spots on the boards. A pale yellow wetness on the title page, with brown margins slip.
The book is not only an account of the art of writing, but also a linguistic Treaty and phonetics of the Spanish language, with provincial differences ...
Etiquette Libros Antiguos Puvill. Barcelona. --- Please note that the translation in english is done automatically, we apologize if the formulas are inaccurate. Contact us for any information!