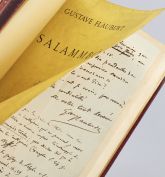 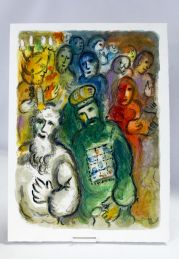 
Original lithograph in colors, one of the 15 proofs printed on Imperial Japan paper and reserved for the artist and his collaborators, one draw with 20 other japan and 250 Arches paper. unsigned Event, as all races in the series except the frontispiece.

Superb test of Japan made especially for The Story of Exodus, published in 1966, Chagall painted the 24 lithographs inset printed by Mourlot.
Fernand Mourlot, undoubtedly the best artisan lithographer of the twentieth century, was naturally the printer and the friend of the greatest artists of his time. "Picasso, Matisse, Chagall, Miró, Braque, Dubuffet, Léger, Giacometti ... have enriched their own expressions and contemporary art a new area of ??research. With Mourlot, and thanks to him, lithography has acquired both personality and future. " (Pierre Cabanne, in fifty years of lithography).

Already printer of the two volumes of the Bible illustrated by Chagall, Mourlot contributed to the formation of the artist in the art of lithography in the 1950s it was at this time that Chagall indeed begins to attend workshop Mourlot to learn the lithographic processes and he became friends with the artisans of printing, including Charles Sorlier.
So is this the top of his game as Chagall realizes this Exodus story that coincides with the completion of his immense lithographic and pictorial work on the Bible began in 1930 at the initiative of Ambroise Vollard. This decorative cycle entitled Biblical Message T will also behind the creation of the Marc Chagall Museum, originally the National Museum of Biblical Message Marc - Chagall.

Extremely rare first test printed on Japan, the best paper and the best for color prints.