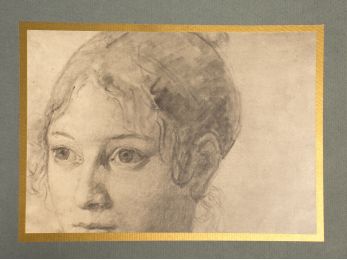 
Chez J.-E. Bulloz | à Paris 1903 | 37 x 48 cm | loose leaves with custom slipcase
The very rare first edition, consisting of only 100 numbered copies, the text on Arches paper with 100 charcoal portraits laid down on thick grey-blue paper, margins slightly soiled, gilt listel frame to each portrait, Bulloz stamp to lower right.
This copy has a half red morocco chemise with flaps, spine soiled, double gilt fillet to covers, title giltstamped on upper cover, cloth and paper flaps heavily damaged (lower flap lacking), headpieces rubbed with lacks to head and foot of joints, corners rubbed, ties lacking.
Portraits of political and intellectual figures from the 19th century. The majority of the illustrations are signed and dated in the plate.
These reproductions were mostly done after works in private collections. A noted specialist on Ingres, Henry Lapauze (1867-1925) notes in his introduction, «Thus these fantastic portraits, most of which are jealously guarded as family heirlooms or are the pride of private collections, become a national treasure that all may look upon.» Lapauze's main goal was to allow a broader public to become better acquainted with Ingres' work at a time when culture was elevated into the ranks of the French national heritage by the Third Republic.
It was thus that Jean-Auguste-Dominique Ingres' (1780-1867) work once more awoke the interest of art historians and the general public at the turn of the 20th century. These one hundred portraits make up a visual gallery of Ingres' circle. Lapauze thinks it is of little importance whether or not readers are familiar with the people portrayed, since the painter's genius is enough to get across the «master's glorious talent» and to ensure «the delight of people of good taste». Ingres is thus elevated into a genius of 19th century
French painting.
A very rare copy of the first edition of one hundred portrait drawings by Ingres.