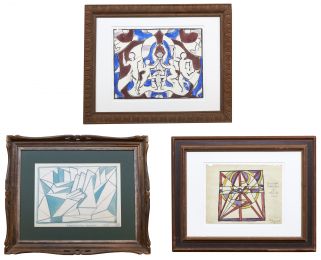 May 16th 1920 | work: 23 x 30 cm frame: 38,4 x 48,6 cm | framed leaf
This early composition, one of the rare ones still preserved, attests to her modernism and total symbiosis with her choreography. The dominant curves of the bodies in this Gouache with dancers, dated “May 16th 1920” evokes the androgynous silhouettes of Matisse's round dance (La Danse, 1910), as does the choice of vibrant blue and dark ochre tints.
A Cubist aesthetic appears in the movement of the dancers with their unrelenting symmetrical balance – while the boldly contoured kaleidoscopic designs betray the influence of Vorticism, whose members during the same period assiduously frequented the underground club of Loïs' lover, Margaret Morris. This work from the London era will find its fulfilment the following year in the choreographies created in France where the Margaret Morris School settle in the summer.
The photographs of these sensational performances from Dinard to Cap d'Antibes show very similar compositions, notably one of the scenes of Hutton's ballet, entitled Étincelles, created in 1922 to music by Maurice Ravel.

2. Signed original gouache “Background design, 1922”
1922 | work: 26,5 x 36 cm frame: 40 x 50 cm one framed leaf
One of the only original preserved stage decor sketches by Loïs Hutton, also one of the first of her career. This abstract composition reflects the artist's incredible versatility. She flourished both as a principal dancer at her lover's school, the Margaret Morris School as well as a choreographer, set and costume designer. These painted sets on large fabrics served as the backdrop to the school's dance troupe productions and solo dances by Loïs who had previously painted a design on canvas based on a sketch by her mentor the Fauvist painter John Duncan Fergusson. Trying her hand here at a radically new and ambitious style, her design joinsthe angular movements of her dances and is inspired by the teachings of Cézanne:  “Everything in nature is modelled on the sphere, the cone and the cylinder” (letter to Emile Bernard). This vital attention paid to volumes goes hand in hand with a fragmentation of motives close to Edward Wadsworth's Vorticism.
Hutton visited at that time Wadsworth and the group of Vorticists in Morris' Chelsea underground club, a laboratory of modern dance where the set in its large-format version may have been displayed in December 1921 or the following year as suggested by the two dates on the lower part of the composition and on the back.

3. Signed original gouache “Composition – Ground design of dance, fool's dance”
may 22 1919 | work: 20 x 25,5 cm; frame: 30 x 40 cm | one leaf
One of Loïs Hutton's rare abstract works, a horizontal and graphic exploration (entitled “Ground design”) of her Fool's Dance choreography. A hypnotic solo dance that she performed for the first time in January 1920 to music by Edvard Grieg.
In this interesting and innovative vision of dance, Loïs Hutton lays down the products of the force of her choreographic
movements on paper: a ballet of lines and curves filled with vivid colours. This fluid and dynamic composition is marked out by a square with asserted outlines, acting as both a physical support for the painting and a material surface for the scene where its movements unfold – an essential space of creation to be compared with the “original plan” theorised several years later by Kandinsky in Point et ligne sur plan (1926).
Presented at the Margaret Morris Club in Chelsea where her very first creations were born, Fool's Dance will be performed again at the Château des Deux Rives in Dinard in July of the same year. It earned Hutton one of her first mentions as a performer and choreographer in the French press, in the newspaper Comoedia on 20 July 1920, and marks the beginning of her notoriety in France.
Loïs Hutton: “Dancing as an art, instead of an idea”

Formed at the crossroads of Cézanian, Cubist and Vorticist modernities, Loïs Hutton occupies a special place with the European avant-garde at the heart of the roaring twenties. She develops an ambitious graphic and choreographic work initially in the Chelsea lesbian art circle then on the Riviera where her dances will enchant the lost generation.In 1918, Loïs entered the school founded by Margaret Morris, who was already a renowned dancer, suffragette and feminist, in the London district of Chelsea. This experimental school, inspired by Raymond Duncan's  – brother of famous dancer Isadora – neo-Greek Akademia, and its use of simple tunics giving freedom to the bodies of barefoot dancers, had an eminently political vision rejecting the artificiality of classical ballet and its patriarchal organisation. Hutton began at the Margaret Morris Club, a sort of London annex of the famous Montparnasse arrondissement, where Vorticist artists and writers such as Augustus John, Jacob Epstein, Katherine Mansfield, Scottish architect and designer Charles Rennie Mackintosh and Ezra Pound mingled. A place of freedom and homosexual love, in which Hutton gradually asserts herself as an artist and choreographer.In this first part of the 20th century marked by an unprecedented intellectual and artistic proliferation, Hutton pushes to its climax the “New Spirit” described by Apollinaire in his review of the ballet Parade (1917) which “promises to modify the arts and customs from top to bottom, in universal joy”, “because until now the sets and the costumes on the one hand, the choreography on the other, had only a fictitious bond between them”. Less than three years later Hutton achieved the true “total art” dear to German romantics, mastering choreography, writing, masks, costumes, sets and lighting all at once while the Ballets Russes called on a cohort of artists including Henry Laurens, Pablo Picasso, and Nicolas Roerich for their choreographic creations.In 1923, the Margaret Morris School is established on the Côte d'Azur and opens an summer school at Cap d'Antibes where Hutton begins a new creative and sensual adventure with the French dancer Hélène Vanel. They undertake rehearsals by the sea, outings alongside Hemingway and performances as far away as Brussels or Paris at the Théâtre des Champs-Elysées, even eclipsing the latest production of the Ballets Russes in the heart of critic Harold Levinson. Vanel and Hutton, untameable lovers, soon separate from Margaret Morris and the following year publish their manifesto of the Rythme et Couleur movement, claiming their definition of total and rhythmic art inspired by Rudolf Steiner's theosophy."We look for rhythm: rhythm in space, rhythm of lines that leap and break, intertwine, swirl, flee, rhythm of volumes that arise and light up in the depths, recede, fade away, each having its place and inevitable value, and everywhere and in everything, balance” they declare in this manifesto. The radiant dancer devotes all of her creations to the visual rhythm of images, from which she draws the name of her new Rythme et Couleur movement musically inspired by the Montparnasse "Groupe des Six". Founded in 1924, Loïs' original movement is embodied in her troupe of dancers always celebrating the liberation of the female body and inspired by Dalcrozian dance.

On the idyllic heights of Saint-Paul-de-Vence, “les danseuses de Saint-Paul” open their own studio in a house in the village as well as a theatre. Joined by Lucia Joyce, James Joyce's daughter, as well as a handful of young girls, the troupe rehearses in the middle of nature at the place now occupied by the Maeght foundation more than ever at the forefront of modernity. In the middle of the 1930s, the names Loïs and Hélène were on the lips of the most influential artistic and political elite, from Dali to the Duke of Windsor and Picasso. They live their homosexuality without constraints and share their bohemian life with artists, writers and poets who visit them and come to admire their performances illuminated by torchlight.

The Grecian Isle of Lesbos has its votaries at Saint Paul
Like nuns they live secluded lives with scarce a man at all
A quite distinct phenomenon associate with Loïs
With shortened hair she seems to care for girls far more than boys
Waldo Peirce (quoted in Emerson, Rythm & Colour, p. 236)

After the Art Nouveau embodied by Loïe Fuller, the return  to ancient Greek art with Isadora Duncan, it was Loïs Hutton's turn to give a new face to the avant-garde during the inter-war period by thinking about painting like dancing and dancing like painting. She gave her choreographic and pictorial works the sharp angles of Cubism and the Vorticist dynamism, unifying the beauty the lines and body movement.