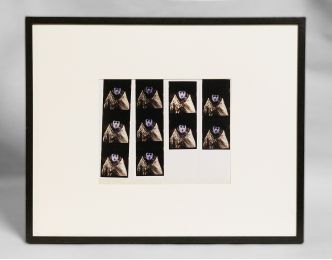 
Ten original photographic portraits of Michael Jackson with the golden cape embroidered
1999| Photograph: 29.7 x 25 cm / Frame: 62 x 52 cm | one contact-sheet framed under a mount
Original print of this color photograph, presented like a contact sheet, signed by the artist, numbered 1/1 and dated 2010 – date of sale of these unpublished shots by Pierre Bergé et Associés.
It is in 1999 during a stay in London that Michael Jackson noticed Arno Bani’s work in an issue of the Sunday Times magazine. Fascinated by his fashion shots, he brought the young 23 year old photographer to New York and asked him not only to photograph him, but also to define his look for the next ten years. This meeting will be followed by several working meetings and finally a three-day photoshoot at the Malakoff studios in the southern suburbs of Paris.
These photographs, supposed to serve as an illustration for the Invincible album cover, were claimed by Michael Jackson’s record company and were not revealed to the public until 2010, the year after the King of Pop’s death.
«This collaboration will finish Arno Bani’s installation as one of the most talented photographers of his generation. Subsequently, he was contacted by fashion and luxury institutions such as Lacroix, Givenchy and Cartier and by musicians such as the duo Air, David Guetta and Bob Sinclar. At 25 years old, Arno Bani is a photographer recognised beyond the borders of fashion. Made of oppositions, mixing classicism and modernity, his monochrome approach to image is now inescapable and is seen on the pages of Citizen K, Spoon, Visionaire and Jalouse. He also photographed Monica Bellucci, Mélanie Thierry and Noémie Lenoir.» (Pierre Bergé et Associés sales catalogue, December 2010)
Ten original photographic portraits of Michael Jackson with the embroidered golden cape.