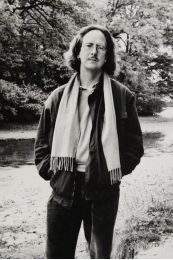 
Large original photographic portrait in black and white directed and shot by Marc Trivier.
Unsigned silver print, like most of Trivier's works. Unique proof drawn by the artist.
Small spot in the upper margin of the Warhol photography.

Photographs of artists, madmen, trees or slaughterhouses, Marc Trivier approaches all these subjects with a look as precise as intense.
"In its cosmogony, every thing, every being, vegetable, animal or human, deserves the same respect. For all are confronted with the same law of brass: loneliness. (Luc Desbenoit)
The beauty that emanates from his photos comes from this nudity. There is no editing or cropping. We find in his work the same square format that traps our eyes in photographs where the makeup of color is rejected for an incisive black and white. Since all artificiality has disappeared, we are not dealing with the staging of a subject but with a presence exacerbated by the radiant and singular light, witness of a moment of life and not of pose. It is this light, linked to and obsessed with Trivier's medium, that gives his works the aura that makes them so present:
"Of thirty-five years of photographic practice, of obsessions, it is perhaps that which remains: a singular mode of recording of the burning of light, declined from one image to another, in a succession propositions that are similar and yet each is as singular as the fraction of time to which it refers. (Marc Trivier)

Taken from the front, with a look at the subject directed towards the lens, the photographs that Marc Trivier realizes personalities of the 1980s are not those of a star portraitist, but result on the contrary from a desire to desacralize:
"Instead of being a portraitist of writers and artists among many others, he is marginalized by his device: under the pretext of adjustments, he makes his models wait, he makes them ask several minutes which gives them a weary air. He may be waiting for a more natural behavior. And we find ourselves facing Francis Bacon in precarious balance, Samuel Beckett, Jean Dubuffet or Michel Foucault more or less packed in their chair. Intimate images. ". (A picture of tifoxing Marc Trivier, S. Rousselle-Tellier, in Marges, 2004)
Photographed in their personal universe, most of the time their room, the subjects surrender themselves, no longer master their image. The imbalance that results reveals the fragility of these strong personalities, and allows Trivier to restore the unity of the intimate body and the public work.
"I read Genet; for me Genet, it was letters on a book. And then one day I saw his portrait, it was like a fracture. How was it possible that these signs are also someone? To make a portrait is to tie up the name and the face. (Marc Trivier)
Warhol, Foucault, Beckett, Dubuffet ... the greatest writers and artists have posed for Trivier. At the same time, the artist is also interested in the margins of society, which men do not want to see. He then photographs the lunatics and slaughterhouses he places next to celebrities. By the end of the 1980s his work was unanimously recognized and he received the prestigious Young Photographer Award from the International Center of Photography in 1988 as well as the Prix Photographie Ouverte (Charleroi). After the Palais de Tokyo in Paris and the Musée de l'Elysée in Lausanne, the Casino in Luxembourg, the European House of Photography in Paris devotes a major retrospective to him in 2011.